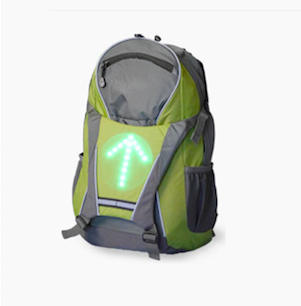 New cycle startup Cyndicate has released a range of cycle safety products to the UK market.

The Cyndicate system aims to keep cyclists in control of their handlebars as much as possible by allowing them to compliment arm signals using a wireless remote control. The control is attached to the handlebars and sends a Wi-Fi signal to a range of accessories and backpacks that show other road users exactly which direction the cyclist is taking.

“Whilst many cyclists are confident about their own skills and abilities, there are lots of us out there who are nervous about cycling; especially in busy road conditions or at night. I wanted a simple system that made me feel safer when I was indicating. Being a car driver, as well as a cyclist, it came to me that drivers no longer stick their arm out of the window to signal that they are turning because they have indicators and so why not have a similar system for cyclists,” the brand commented.

The product is available now from Cyndicate’s website here.

Share
Previous Ofo launches in Norwich
Next What events really benefit the dealer?