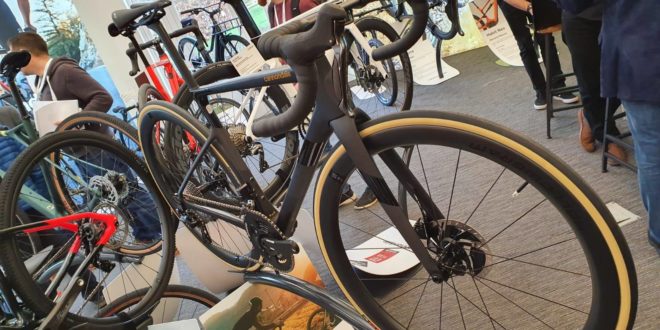 COREbike sets the tone for 2020

If there is one thing that’s capable of kick-starting a year in the cycling industry, it’s a trade show. And given its early date in the calendar, COREbike was there once again to act as a curtain-raiser for the year.

The show returned to Whittlebury Hall from 26th to 28th January, with many exhibitors showcasing new brands, products and ranges to visitors.

Silverfish was showcasing brands including Yeti Cycles, Marzocchi, Knog, 100%, Mondraker, Birzman, SDG and Michelin, and enjoyed good footfall for all three days, says sales manager Scott Hillyard, with a feeling of optimism amongst the attending retailers. “We had an overwhelmingly positive response to the all-new road range from Michelin with many retailers looking for an alternative for various reasons,” says Hillyard.

“Thanks to the hard work of the team and the support of many of our brand partners who took time out of their busy schedules to join us at the show, Silverfish had a cracking COREbike show,” adds Darren Mabbott, managing director. “It was also great to see how positive all our dealers were. After the last six months, it’s really encouraging to see some green shoots! It feels like 2020 could be better than we were expecting, so fingers crossed.” 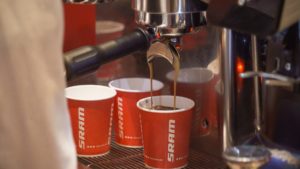 ZyroFisher was showing brands including Evoc, Altura, Giro and Hiplok, the latter displaying its ANKR. The SRAM barista was also available for all visitors’ coffee needs, in exchange for donations to World Bicycle Relief. Over £500 came from voluntary contributions at the show – matched by ZyroFisher to donate a total of £1029.10 to the charity organisation.

“It was another great year for us at COREbike,” said Andy Budd, director of IBD sales. “We launched a number of new products over the three days of the show, as well as showcasing Niner bikes, the latest brand to be added to our portfolio.

“The organisers’ format is entirely focused on the best possible experience for the dealers who attend, and that is unique in our industry. The result is that we get unparalleled one on one time with all of the customers who attend, and ultimately this is why we keep coming back.”

Enduro Bearings led workshops over two days at the through distributor Extra UK, which covered a number of topics across products in the Enduro Bearings range including bearings, bottom brackets, and tools. The distributor was also showing brands including Fizik, ABUS, Pirelli, FFWD, Maxxis, Ergon, Cane Creek, Rapid Racer Products and Topeak. 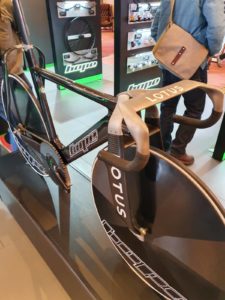 Moore Large introduced a new house brand, SureShift, at CORE, its latest product innovation that is designed “with the sole purpose of making cycling easier for children”. Sales director Adam Biggs says the show attendance this year was “exceptional” and would consider the response to the Forme range as a “milestone moment in the brand’s history”.

“I would like to thank all retailers for their positive feedback,” says Biggs. “Another standout point I noticed from the show was the level of optimism from specialist IBD stores on their outlook for 2020, with the vast majority reporting overall growth over the last 12 months, particularly in the electric and urban mobility sectors which helped to explain why our Tern stand was so busy throughout the show too!”

Hope brought its HB.T track bike to its stand in the reception area, featuring radical aero features and revolutionary disc wheels, all manufactured at the brands own facility in Barnoldswick. It was also showing an ever-expanding range of e-bike parts, with new crank and chainring options joining its existing high-performance brakes and wheelsets.

Upgrade had a range of brands at the show, including Nutcase Helmets, KinesisUK, DMR, Lezyne, TRP, Reynolds, Sector, Praxis, Effetto Mariposa and Trust Performance. The partnership between Upgrade and Nutcase was announced towards the end of last year, and the brand’s entire range is equipped with MIPS technology and consists of three helmet models for all ages.

A new brand at CORE for Windwave was High5 nutrition, a partnership which took effect at the beginning of February. “COREbike 2020 gave us a fantastic opportunity to spend time with the people that matter, our customers,” says Luke Leuillette, commercial manager. It’s a great opportunity for all in attendance to touch and feel the latest equipment. We look forward to growing existing and new relationships formed at COREbike during the coming 2020 season.” 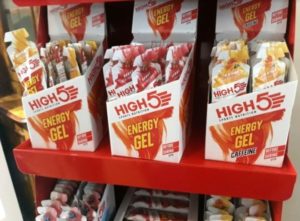 It was also an important show for Scott Sports with new key products launching this year – the ‘star of the stand’ being the Addict RC road bike. “These events are always good for forging connections with customers and media,” says Tony Fawcett, bike marketing coordinator. “It allows us to talk and relay key features and how they work. The event was definitely a successful one in our eyes.”

Hotlines was showcasing brands including WTB, Rondo and Ragley, the latter launching its entire MY20 range with two notable additions to the line-up – the new Blue Pig Race and the Big Wig Race complete bikes.

“COREbike was an important event for Hotlines this year,” says Dave Flynn, head of marketing. “We have a new structure in place, so it was great timing for retailers and media to meet the expanded team.

“Exhibiting a broader representation of fewer brands also benefited us, and dealers were excited by the opportunities available. Lots of positivity. Launching a new range of bikes, Ragley created a real buzz with strong media coverage resulting from the show.

“The new Sam Hill signature pedal from Nukeproof was also shown for the first time, a 200mm Brand-X dropper and bikepacking bags from Lifeline. An incredible amount of hot new products for a midseason show. This all helped to make CORE 2020 our best one yet.”

Ison Distribution was showing a dream bike build based around the all-new All City Cosmic Stallion, featuring the new Redshift Suspension seat post, along with a host of other brand new components. It also had Benno, Squire, MRP, Fidlock, Surly, HT and Passport. “CORE is a great opportunity for dealers to connect with Ison and our brands,” says managing director Lloyd Townsend. “The insights into what’s new, and what’s going on should really be helpful for proactive dealers – both existing and new folks.” 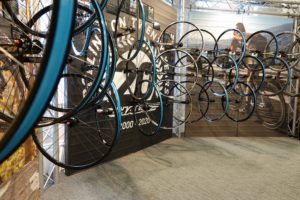 Halo headed into its 20th year of business with the addition of various new products to its range. “COREbike is always a fantastic chance to meet dealers and press face to face in a relaxed atmosphere,” says Jordan Lunn, marketing manager for Halo. “It’s also a great chance to present new products to the press, as well as spending time with suppliers and other distributors. CORE is a melting pot of the UK bike trade.”

2pure launched a new brand, Sprindex, at CORE and also had brands including Ibis Cycles, POC and Moustache Bikes. CSG displayed a range of award-winning bikes, featuring models from Cannondale and GT Bicycles. The bikes on show included the Cannondale CAAD 13, the Cannondale SuperSix EVO, the Cannondale Topstone Carbon, the Cannondale SystemSix and the GT Grade Carbon.

Chicken CycleKit had a whole room dedicated to Enervit – a distribution deal that was agreed last year. It has been exhibiting at COREbike for many years and each year it becomes a “more important part of our sales strategy,” says Gary Turner, sales director.

“The show is a great way for us to showcase and launch our latest products to hundreds of dealers over three days,” says Turner. “This year, we had dedicated displays for Prologo, Campagnolo, Deda, Tifosi, Cinelli, KMC, Zefal and Schwalbe as well as a whole room dedicated to Enervit.

“We find dealers really appreciate the opportunity to view whole ranges with branded POS so they can visualise how brands could be displayed in their own stores to improve sell out. We took the decision to dedicate a whole room to Enervit as there are big commercial benefits for dealers to become stockists. Enervit dominates other European markets and this is its plan for the UK.”

Three companies made their first appearances in the exhibitor line-up at CORE – Seventies, Pinpoint and Ultra Sport Europe. Pinpoint debuted with 4iiii power meters, Limar helmets, LedLenser lights and AfterShokz performance headphones. It also launched its exclusive UK distribution of the Eovolt folding e-bike brand at the show, with two different models being launched, the Eovolt City and the Eovolt Confort. Both bikes were on display and are available to ride.

Lyon returned to the show after its debut in 2019. “After a highly successful first appearance at COREbike in 2019, we increased our presence at the show this year and once again had three positive days with visits from new and existing dealers,” says Nils Amelinckx, brand manager, cycle.

“Over the past year, our portfolio has seen the addition of three high-quality brands which seems to have piqued the interest of community and experience-driven stores. Fortunately, due to the strong draw that COREbike has, those types of dealers were in abundance giving us a good amount of leads to start the year with.”

i-ride was also exhibiting, showing brands including Orro, Fulcrum, Northwave, DeFeet and Vredestein. “The show went well and our new instore tablet initiative was well received,” says Adam Glew, e-commerce and marketing manager. “We are going to be rolling out a new click and collect scheme to help stores that can’t stock full ranges and the tablets are part of this. Overall it was a very positive show for us.”

COREbike 2022: What to look out for at this year’s show