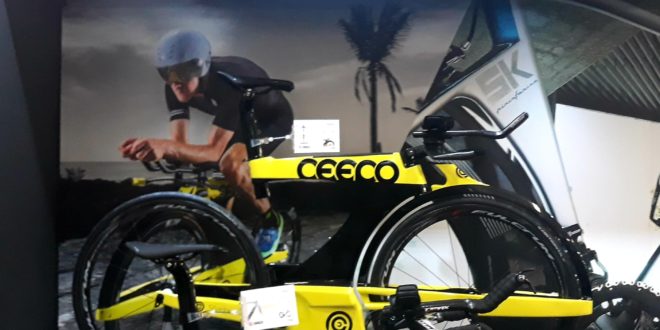 Extra is launching two new brands to the UK market at the show, M2O Industries and Tubolito, alongside an expanded product portfolio from its existing brands.

Stephen Hayes, head of marketing, said: “We like to bring the brand to CORE as well. We’ve got representatives from pretty much all our brands, so it’s been a big change for us this year, along with a new exhibition stand and lots of new people joining the business.”

Moore Large is also showcasing its brands at this year’s show, including Tannus, Tern, Alpina and WeThePeople. Brand director Adam Garner said: “The Armour from Tannus is really quite exciting for us. Everything’s exciting because it’s new, our brand portfolio keeps evolving as we’re adding bits to it.

“There’s kind of been a trend for people doing concept stores, like Specialized and Giant. We know that with Tern we’re never going to be able to do a Tern concept store, but what we’re offering this weekend and the next couple of days is a corner store. That’s a brand new concept for us.

“We’re launching a brand new range of Alpina as well, with focus on this urban, visible product. We’ve been doing Alpina for a few years, but it’s slowly starting to get a bit of traction now. WeThePeople was launched this year, so this is its first time at COREbike with us, so we’re definitely excited about that.”

From Knog comes the Cobber, a light that has 330 degrees visibility, meaning that it is "just as visible" from the side of the bike as the back, said marketing manager Richard Schofield. The distributor is also showcasing brands new to its portfolio, Birzman and Michelin, alongside the new Protection range from 100%.

Schofield added: “100% never had armour before, so it’s all new. Now the range is gloves, goggles, helmets, protection and riding gear, so quite a lot going on. Now we’ve got things for downhill, trail, and the glove range is not specific to any particular discipline.”

Visitors are also able to try out new flavours from Skratch, with three new bars that are being launched next month. It has raspberry and lemon with chocolate, peanut butter and strawberries, and parmesan and black pepper, which also has some sun-dried tomatoes in it.

i-ride is also showcasing new brands it has recently added to its portfolio, including Bryton Computers. Marketing manager Adam Glew said: “We’ve got four or five brand new brands, with some products within the brands we already do. Bryton hasn’t been distributed in the UK for probably about four years, so no one in the UK really knows about them. The products look really nice and premium, so they fit with the rest of our brands very well.

“Ceepo is triathlon specific. It has been distributed in the UK previously, but by a small company so they weren’t quite as visible as they should be. Hopefully now we can get them out and get them more visible.”

COREbike 2022: What to look out for at this year’s show