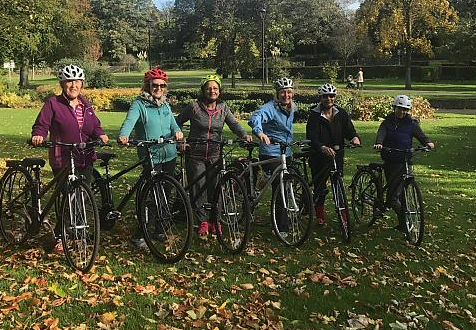 A cycling group running confidence-building rides at Walsall Arboretum is back up and running after a mass theft, thanks to bicycle donations from local people.

The Walsall Arboretum Community Cycle Club, a group affiliated to national cycling charity Cycling UK, was put on hold in November after all 11 of the group’s new bicycles were stolen from a locked compound. The bikes were just a few weeks old, and had been chosen especially for new or unconfident cyclists. The group’s participants, many of them elderly women, were devastated by the news.

No one has been arrested in connection with the crime, but following a media campaign by Cycling UK, the local community opted to replace the bikes in the weeks before Christmas.

“It’s been incredibly moving to see how many wonderful people came forward to help the group in our hour of need and give us their bikes,” said Cycling UK’s cycling development officer for the West Midlands Lesley Easter. “Thanks to their donations, we’ve been able to resume our activities very quickly and keep our participants cycling, including Joan, the eldest at 85 years old.”

Sharon Sewell of Newport, Shropshire, was one of the people to respond to the call. She said: “I’d had a mountain bike in the shed for a few years that I hadn’t used, so I tracked the group down on Facebook. The staff at my local bike shop Nova Cycles were fantastic; they had seen the story too and serviced the bike and replaced the gears for free before it was donated.

“It’s great to see the group is back up and running again, and I’m wishing them all the best for 2018.”

Kishori Agrawal, a member of Walsall Arboretum Community Cycle Club and a retired GP said: “When I heard that the bikes were stolen I felt shocked and horrified, but the positive response was amazing. Cycling has given me a new lease of life. I feel more energetic and active, it’s given me an opportunity to get out in the fresh air and meet other likeminded people.

“I’m staying motivated and keeping my age-related health problems at bay and most of all leading an independent life and feeling happy. My dream is to go cycling with my children and grandchildren by canal for miles.”