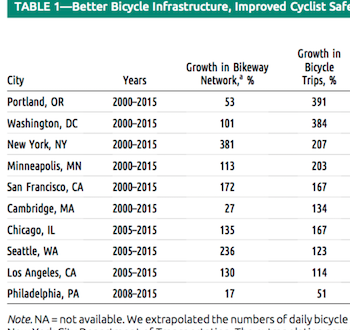 The lead editorial in the December issue of the American Journal of Public Health calls for towns and cities to install protected bikeways. AJPH is the number one public health journal in the USA. Most of the AJPH is behind a paywall but this important piece piece by academics John Pucher and Ralph Buehler is free to view.

“Except for some college towns and a few large cities, most roads in the United States have no cycling infrastructure, and what exists is often dangerously designed, poorly maintained, and not connected to form a useful network, says Pucher (Buehler collates the stats and the tables; Pucher writes the text).

“Bicycle infrastructure with physical separation from motor vehicles is especially important on high-speed, high-volume arterials with large vehicles such as trucks and buses,” adds Pucher, who is Professor Emeritus at the Rutgers University​ in New Brunswick, New Jersey.

“The Netherlands, Germany, and Denmark offer decades of experience on how to improve the safety, convenience, and comfort of cycling facilities.”

A table by Buehler, who is with the School of Public and International Affairs, Virginia Tech, Alexandria, shows the “significant improvements in cycling safety” after the installation of protected bikeways in some US cities. The table shows that between 2000 and 2015 New York City expanded its bikeway network by 381 percent. Bicycle trips in that time grew by 207 percent, and there was a 72 percent reduction in fatalities and serious injuries.

“It is not simply a matter of expanding bicycle infrastructure, however,” cautions Pucher. “The specific type of bicycle infrastructure matters. The safest kind of facility, by far … are on-street bicycle lanes that are physically separated from motor vehicles by raised curbs, bollards, or concrete barriers.”

Pucher concludes: “More and better bicycle infrastructure and safer cycling would encourage Americans to make more of their daily trips by bicycle and, thus, help raise the currently low physical activity levels of the US population.”

Share
Previous Get your nominations in for the BikeBiz Awards now!
Next Strong cycling growth reported by Halfords