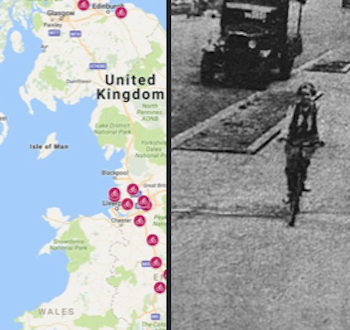 A new Kickstarter project by urban planner John Dales and BikeBiz executive editor Carlton Reid is hoping to raise cash to resurrect 280-miles of "forgotten" 1930s protected cycleways. The project launched this morning and had raised £1,600 from 66 backers by lunchtime.

British Cycling policy advisor Chris Boardman is one of the project’s fans. He said: “This is a marvellous proposal. It could recover some of our lost past and give normal people the opportunity to change the way they travel, in safety. As a bonus, in these austere times, it would have a meaningful impact for a very modest price."

Reid and Dales want to research the 70+ routes identified so far and mesh them into existing cycleway networks. Dales is director of Urban Movement of London and ex-chair of the Transport Planning Society.

The cycleways were built between 1934 and 1940, and were majority paid-for by the Ministry of Transport, which would only give grant-aid to local authorities wishing to build "arterial roads" if they included cycleways in their plans. Some were kerb-protected and extended for more 18 miles.

Many still exist but, says Reid, are either hidden-in-plain-sight or, in some cases, buried just beneath grassy surfaces and could be easily dug up and re-used. Others need to be "listed" in to protect them from being demolished.

“That Britain once had a great number of protected cycleways is now almost totally unknown,” said Reid. “I started researching these Dutch-inspired cycleways for my forthcoming book Bike Boom and when I started to dig deeper (sometimes literally) I came to realise there were far more of these 1930s cycleways than I, or anybody else, knew about.

He continues: “It’s important to map, record and then rescue these cycleways. Many have lasted this long only out of sheer luck, and need to be listed so that they can’t be destroyed in the future to, say, widen roads for cars.”

The Kickstarter campaign runs for a month and is seeking £7,000. Corporate backers of the project get logo placements on the campaign’s reports to backers and to government and local authorities.