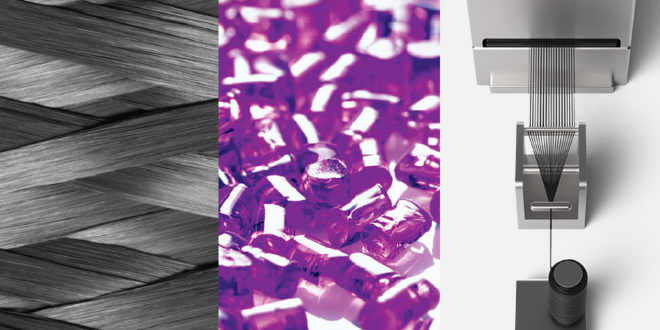 German composites company Covestro – formerly known as Bayer MaterialScience – says lightweight continuous fibre-reinforced thermoplastic composites could revolutionise the bike industry. Parts made with CFRTP could be made with machines rather than the laborious method of making parts with standard composites which are, in effect, hand-made.

Previous restrictions on synthetic resin composites, such as the intrinsic brittleness of the material, have been overcome with CFRTPs, said a statement from Covestro.

Its impact-resistant matrix material polycarbonate is not like the plastics used on injection moulded plastic bicycle frames such as the one made by America’s Original Plastic Bike Inc of 1971 which took out magazine adverts, but it sold very few, if any, of its proposed products.

The most famous plastic bicycle (if we discount carbon composite bicycle frames, that is) was the Itera bicycle of Sweden. This was born from a massive 1978 grant from the Swedish National Board for Technical Development. By 1980 a rideable bicycle – of sorts – was demonstrated by the Itera Development Center AB, and in the following year the first mass-produced Itera bikes were shown to prospective retailers and to the press.

However, many of the frames and plastic components snapped in use, most of the parts were proprietary and therefore difficult replace, and the Itera was said to be uncomfortable to ride. Nevertheless, it’s estimated that in the four years the Itera was made 30,000 units were sold around the world.

The benefits of an injection-molded cycle frame are obvious – manufacturing is swift (just pop them out of mold every minute or so), and they won’t rust. Complex shapes can also be achieved.

Late last year, BikeBiz reported on an Austrian start-up – Plastic Innovation – which wanted to licence its “bicycle of the future” manufacturing method.

And now Covestro is piling in. Swiss company Next Composites has made a MTB crank from Covestro’s CFRTP. Dr. Niccolo Pini, founder and managing director of Next Composites said: "Even for simple components such as a crank, you need sixty to seventy carbon fibre blanks in classic synthetic resin processing, which have to be aligned manually in the correct order and position. This is exhausting work that requires a lot of concentration. No wonder there are quality problems."

By using Covestro’s continuous carbon fibers impregnated with the plastic polycarbonate Next Composites has been able to manufacture its crank with machines, and at a fraction of the price of making the crank from carbon composites.

Covestro co-CEO Dr. Michael Schmidt added:"The great strength of our CFRTP tapes is that they are not only able to absorb high forces thanks to the continuous carbon fibres but that with their help, several conventional steps in the processing of previous carbon fibre thermoset composites can be combined in a single, fast process.”

With 2017 sales of €14.1 billion, Covestro is among the world’s largest polymer companies.