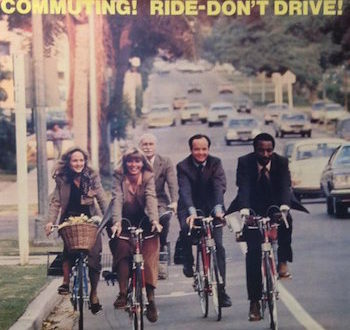 Can you shine a light on the date and location of this Schwinn poster?

I’m writing a book about the variety of bike booms since 1905, and have found this rather nice Schwinn poster and would like to find out more about it.

It’s probably Chicago, because that’s where Schwinn was based (it was founded in 1895). US consultant Jay Townley, a long-time Schwinn exec, isn’t famililar with the poster but agrees it’s likely Chicago.

Brad Hughes, a Schwinn marketting executive in the 1980s, now of Matisse in Taiwan, also reckons it’s Chicago because that’s where Schwinn’s then ad agency, Communigraphics, was also based.

He believes the bikes are Schwinn Varsities or Continentals, and the Suburban. For a likely date he reckons it’s 1977 or 1978 because of the large front reflectors on the bikes – the US Consumer Product Safety Commission mandated the fitting of such reflectors after 1976.

However, on Twitter @cyclevirus reckons the poster dates to 1981, and he surmises that because of the shape of the car headlights.

Whatever the location and date for the poster it’s a remarkable image – many of the company’s other posters in this period were decidely sexist (women in bikinis lusting after men on Schwinn bikes and similar) and overwhelmingly white. This poster manages to be widely inclusive. The riders are also in normal clothes, and are not wearing helmets even though helmet-use was growing in popular in the US by the mid-1970s.

If you have any ideas on the location and date of this poster please add your comments below.

UPDATE: The poster probably dates to 1979 because the photograph was used in the 1980 Schwinn catalogue as pointed out by All About The Ride.