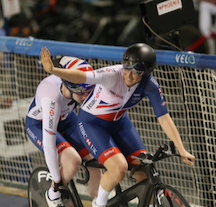 UK Sport and British Cycling have outlined the next steps that are being taken as part of the independent review into the culture of British Cycling’s World Class Programme.

UK Sport and British Cycling had intended to publish the findings and key recommendations of the review in February 2017. The report and its findings are of great strategic importance to both British Cycling and UK Sport and both organisations are keen to publish as much of the report as possible as well as their respective action plans to address the recommendations.

Following legal advice, the independent panel has been required to take some necessary final steps in order to protect those who have willingly given evidence to the review and to ensure that others are not deterred from contributing to any future reviews of this nature.

On 1 March at Manchester’s National Cycling Centre, the home of British Cycling’s World Class Programme, chair of British Cycling Jonathan Browning and chief executive of UK Sport Liz Nicholl met with staff and riders to update them on the positive actions that they would start to experience as a result of the emerging lessons learned from commissioning the review.

Chair of British Cycling Jonathan Browning said: “British Cycling is widely recognised as having achieved remarkable success in not only in winning bike races but also in bringing many new people into the world of cycling for both sport and recreation.

“Our sport could not have achieved this without the dedication of our talented staff and athletes and we are committed to implementing the recommendations of the independent review in full to ensure we can provide the best possible environment in which they can continue to flourish.

“The failures within our World Class Programme occurred at a time when our sport and indeed the wider UK high-performance system were undergoing rapid transformations in terms of realising unprecedented medal success on the world stage. Nonetheless, athlete and participant welfare is our highest priority and we deeply regret any instance where we have failed to deliver.

“Inevitably such a transformation requires frequent adjustment and evolution of governance, policies, procedures and operating practices. We are very grateful to the independent panel and everyone who contributed to the review for helping us better understand the improvements we need to make, and we are fully embracing this opportunity."

UK Sport CEO Liz Nicholl added: “In the 21 years since UK Sport was established, we have seen a complete transformation in our high-performance system and British Cycling has been the standard bearer for that success. Our athletes have inspired the nation and never more so than they did last summer in Rio where history was made by Team GB and ParalympicsGB.

“While the independent review into what potentially needed to change within the culture of British Cycling’s World Class Programme is yet to be concluded, the work to date has identified valuable lessons – not only for British Cycling – but also some that we as leaders of the system can implement across all our funded sports.

“The people in our system are our greatest asset and by fully embracing the emerging findings and recommendations of this review and the implementation of our recently launched Code of Governance for Sport, our system will continue to go from strength to strength.”

In response to the emerging findings and recommendations of the independent review, UK Sport and British Cycling are already working on implementing detailed action plans.