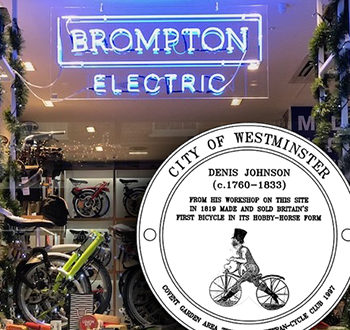 Brompton’s flagship store at 76 Long Acre in London is currently taking orders for the manufacturer’s Electric model, due out early in 2018. On the same site, two-hundred-years earlier, coach-builder Denis Johnson made and sold Britain’s first bicycle, a wooden "hobby horse". There’s a history plaque on the exterior of today’s shop, and also one inside, commissioned by Brompton.

"We were struggling to find a location for our Brompton Junction, mostly because the funds that own most of central London didn’t think that a grubby bike shop fitted with their brand profile," said Brompton CEO Will Butler-Adams.

(The current shop is far from grubby – it features bespoke fixtures and fittings, many made by Brompton, including stair hand-rails. And right now there’s also a store Christmas tree brazed from cycle parts.)

"We heard that there was a chocolate shop that had gone bust on Long Acre, and that if we bought the business, we would also get the lease," continued Butler-Adams.

"It was over our budget, but we went to look at it anyway. It was when we were standing outside that we saw the plaque – we couldn’t believe our eyes, so decided to go for it."

The plaque has been on the exterior of the premises since 1997, and was placed at the instigation of historian Roger Street by the Covent Garden Area Trust and the Veteran-Cycle Club. Street is the world’s leading expert on early velocipedes, and author of The Pedestrian Hobby-Horse.

Johnson’s hobby-horse – he preferred the term "pedestrian curricle" – was an improvement on Karl Drais’s Laufmachine, or "running machine", of 1817.

According to the rating records for the parish of St. Martins-in-the-Fields, Johnson took occupation of 75 Long Acre in March 1818. The current building dates from the nineteenth century but the position of Acre House is the same, as is the road layout.

"Denis Johnson continued in business as a coachmaker at 75 Long Acre for a number of years after the pedestrian hobby-horse had been largely forgotten," Street told BikeBiz.

"He is still to be found under his own name in the Post Office London Directory for 1824, but the following year the same directory refers to Johnson & Allen, Coach-makers, 75 Long Acre. Johnson’s partner was another coachmaker, John Allen, who also became his son-in-law as a result of marrying his older daughter Mary. The partnership between the two men continued for about nine years, until Johnson’s death on Christmas Day 1833."

Street adds: "Although we have no depiction of 75 Long Acre in Johnson’s day, we do have an interesting old print of the Hatchett family’s coachmaking premises at 121 Long Acre. I would expect Johnson’s property to have been similar."

Brompton, too, has a long history. It was founded in 1975 by inventor Andrew Ritchie, who created prototypes of his iconic folding bike from his bedroom, which overlooked the Brompton Oratory in South Kensington. Each bike is hand brazed at the brand’s new London factory in Greenford, close to the site of Britain’s first protected cycleway, built in 1934.

There are twelve Brompton Junction stores across the world, and the brand – one of Britain’s few cycle manufacturers – has 1450 global dealers.

Share
Previous ASSOS will return to COREbike for 2018
Next Cycling to work has huge health benefits, says Arnold Schwarzenegger