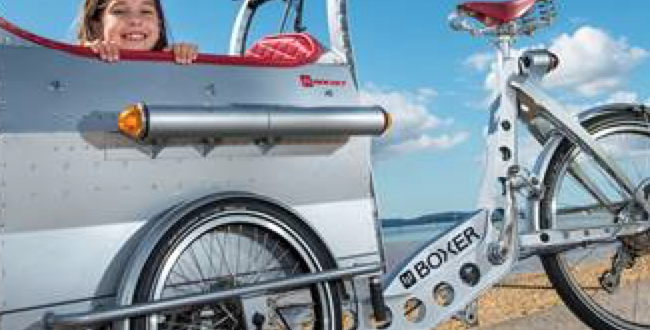 Due to health problems, founder and managing director of Poole-based manufacturer of family and commercial cargo bikes Boxer Cycles Jeremy Davies is on the lookout for investment.

Davies recently suffered a seizure, requiring him to surrender his driving licence for a minimum of six months. "This has put a major spanner in the spokes," quips Davies. Boxer Cycles operates as a one-man-band; Davies is responsible for all operations, including driving parts between process suppliers and deliveries.

"I have gone as far as I can on my own with Boxer, and I need to either sell it to an entity that can take it forward, take further investment, or partner with a company that can assist with building and fulfilment, allowing me to focus on sales," says Davies. "We have attained some seed funding, but this has always been too little too late, and has been ‘hands off’. We have always had to struggle through with just me doing the design, sales, builds and deliveries."

Boxer is probably best known for its outlandish Rocket four-seater family cargo bike, which was featured in the design museum last year. However, its bestselling model is the Shuttle four-seater family bike, which has been recently updated to include the Shimano Steps mid-drive with Alfine 8 DI-2 automatic shifting rear hub. The company is well-respected for its innovative approach to cargo bike design and its practical innovations such as its vehicle-grade lighting option, bought by over 80 per cent of customers as an upgrade.

Boxer’s aluminium frames are made from scratch, utilising local suppliers within a five-mile radius of its Poole factory. "We have tried our best to keep Boxer British and local-built. We’re proud of that," says Davies. "But building in small numbers is costly and involves lots of running around taking parts from one process to another. As a result, my sales and marketing have been woeful, and I’m not making enough sales to allow me to hire staff or make advance orders for key parts such as the motor systems."

"We have built a bloody good brand that has earned a reputation for style, quality and innovation. Our bikes make good profits, the sales are there and we certainly have a lot of interest from dealers over on the continent and the US where the big markets are. We just need some focus to lock down the key designs and execute these sales. We’ve done 90 per cent of the work – we just need help to finish it."

If you are able to help Boxer Cycles, or know someone who may be interested, contact Jeremy on 07917 698 438 or jeremy@boxercycles.com.