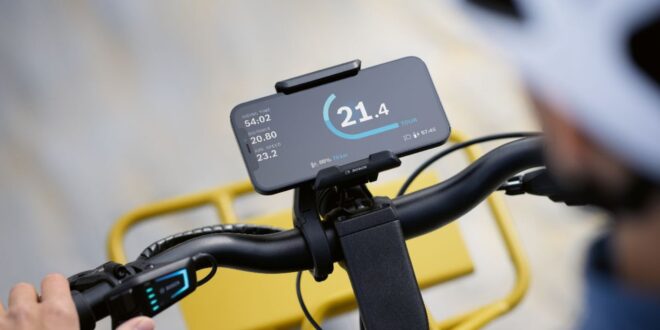 Bosch eBike Systems has announced new features and products for its smart system.

“With the smart system, we have created the basis for tomorrow’s e-bike mobility,” said Claus Fleischer, CEO of Bosch eBike Systems.

“This first update shows the potential of the new system generation: in conjunction with the smartphone and the eBike Flow app, new functions are continuously being added to the e-bike – and the physical experience on the e-bike is thus increasingly linked to the digital one.”

In future, e-bikers will be able to decide before the ride whether they want to rely on the Kiox 300 display or whether they prefer to attach their smartphone to the handlebar using the new SmartphoneGrip. In conjunction with the eBike Flow app, the rider’s smartphone becomes a display. Kiox 300 and the SmartphoneGrip use the same mount and interface, making it easy and convenient to switch between the two options.

All relevant ride data such as speed, battery charge level and remaining range are displayed on the ‘Ride Screen’ of the eBike Flow app on the smartphone. This can be controlled via the LED Remote while keeping both hands on the handlebar. The smartphone can also be charged wirelessly or by cable when riding.

With the new eBike Flow app navigation function, e-bikers can plan the ideal route to their destination. The route suggestions are matched with individually selectable route profiles such as daily rides, leisure rides or eMTB trails.

The map display is also optimised for the respective route profile. In the city, for example, buildings in 3D view facilitate orientation, while detailed route information provides details of elevation and route characteristics during weekend excursions. Additional messages on the map also indicate points of interest such as bicycle stores or charging stations.

If users record their ride data with the eBike Flow app, once linked, this data is automatically transferred to the komoot or Strava apps. After reaching the destination, rides and successes can then be shared with the personal community.

The free eBike Lock function serves as additional theft protection to the mechanical lock. Once set up via the eBike Flow app, the smartphone becomes a digital key. Only when the system recognises the associated smartphone, in a bag or rucksack for example, via Bluetooth, is the motor support automatically enabled when the e-bike is switched on.

This means that in the event of theft, the motor support is absent. The drive unit can optionally emit a sound when eBike Lock is activated and the relevant status can also be easily recognised via the display and LED remote.

The SmartphoneGrip and the new features are now available for all e-bikes with the smart system from Bosch eBike Systems.

The consumer experts at Cycling Plus, MBUK, and BikeRadar have announced their bikes of the …