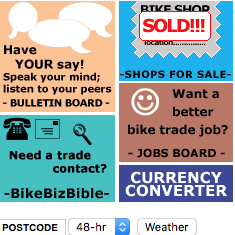 BikeBiz.com has been breaking news stories since 1999

BikeBiz was launched in July 1999, the online companion to new trade magazine BicycleBusiness. Originally it was BikeBiz.co.uk; the dotcom suffix was secured later.

"The beauty of having a website that is uploaded with fresh news every day is immediacy," plugged the new site. "The traditional idea of a monthly or even bi-weekly trade paper is now old hat. We bring you a daily trade paper!"

Innovative from the get-go, the website wasn’t just available on computers, it also pumped out dedicated content to clamshell mobile phones. It did this via WAP, or Wireless Application Protocol, a technology launched in 1999 but, at first, available on very few handsets. The following year the BikeBiz WAP site came joint second in the European Online Journalism Awards. Who were we joint second with? Only the BBC news website!

Industry types could get breaking news on their mobile phones but, probably more importantly, they could also get job ads on the move, too. The BikeBiz WAP service was a boon for on-the-road reps.

BikeBiz added a jobs board two months after launch, and it’s still one of the major drivers of the site.

"Radio and TV took many years to take hold," we wrote in September 1999, "but the internet is taking over the world much more rapidly and businesses that take early advantage of what the WWW can offer them are more likely to be the star performers in the future."

We have been covering online bike retail since it began. The first bike web-stores no longer exist. Bicyclenet.co.uk was early on the scene. It launched in November 1999. "He had never sold a bike in his life before," BikeBiz described the founder, Russell Sears, "but he’s got a computer, a modem and a website, and nowadays that’s all you need."

Sears told us: "These days, there are many people who don’t have the time to shop in the conventional way and would prefer to use the internet as their shopping basket."

And he promised: "We are not trying to prise people away from their local bike shop, but pick up on those people who surf the net looking for what we can sell them. You see, unlike the corner shop, nobody passes Bicyclenet on the way to work. If they want to walk into my shop they have to click on something on their computer, which in essence means they have to come looking."

This was in the early days of e-commerce, when Google was neither alone nor dominant.

"There are dozens of search engines in the UK alone and the number is increasing rapidly," Sears told us, and feeling the need to describe what a search engine was, he added "it’s like the index of a book. You may be somewhere in the book, but unless you can be found in the index, you’re not going to get too many people land up on your page."

This was also the age of "portals" and "web malls", the supposed entrance points to the World Wide Web.

"These are basically groups of e-commerce sites which are held together via a single search database," explained Sears, "so once into the mall the guy looking for a bike will soon find you."

But Sears didn’t think big-ticket items could ever be sold online. "I don’t know too many people, even those that trust the technology, who would part with £1,000+ too easily over the internet," he said.

Some things never change. Take parliamentary antipathy to cycling – this is still a thing today and it was very much a thing in September 1999. In an article headlined "Is a bell necessary on a bike?" BikeBiz discussed the forthcoming legislation to force retailers to fit bells to cycles at the point-of-sale.

"The rule change has been brought about now after a guidedog was struck by a moving cyclist," we wrote. "The guidedog’s owner, 63-year old Jan Thorley of Broxtowe, Nottingham, has since lobbied for the compulsory fitting of bicycle bells and was amazed when after just a single meeting with Lord Whitty her plea was acted upon."

(This, of course, echoes one of today’s campaigns.)

Talking about the legislation in parliament, Broxtowe MP Nick Palmer said there were three types of cyclist. The helpful and aware ones who already have bells fitted; the "cyclo-fascist who wants everybody to get out of his way and who wouldn’t use a bell anyway," and the broad majority of cyclists who would use a bell if one was already fitted but who wouldn’t go out of their way to buy one. Cyclo-fascist? Nice.

BikeBiz has been covering global cycle issues since the beginning. In September 1999 we covered a major earthquake in Taiwan, and how it had damaged many cycle factories. Closer to home we also covered the seismic changes to how the UK cycle industry operated, including Raleigh selling off its factory site.

We might have been at the cutting edge of bike-industry reportage, but – then as now – we could make mistakes. Take this corker of a typo along with its apology: "Sorry to Arthur Cook, finance director at Caratti. In our second issue we got his name wrong. It’s very definitely Cook and not Crook."