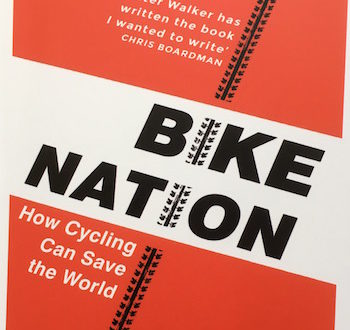 Bike Nation: How Cycling Can Save the World

"A revolution on the roads is approaching," claims the back cover of Bike Nation. "Is it time for drivers to Give Way?" Written by The Guardian‘s Peter Walker, Bike Nation is evangelical about the social, health, economic and planetary benefits of getting more people on bicycles, more often. Indeed, it is sub-titled: "How Cycling Can Save the World."

The 242-page book is the one "I wanted to write," states British Cycling’s Chris Boardman, who appears in the text a number of times. London cycle advocate Dr. Rachel Aldred also makes frequent appearances – Bike Nation is packed with the very latest academic findings about cycling and cycling infrastructure.

The installation of London’s protected Cycle Superhighways get star billing in the book, but Walker has also visited and talked to advocates and academics in New York, Montreal, and the Netherlands. Perhaps the strongest evidence for "build it and they will come", suggests Walker, is the section in the book on the (almost overnight) installation of separated cycling infrastructure in Seville, Spain.

Walker writes about his own personal transformation from a weedy child to somebody with muscular legs and life-entending lung capacity, but cycling isn’t something for wannabe athletes, he stresses, it’s something for everybody. Where cycling is considered normal, and where it’s done by 25 percent of more of the population, people are healthier, happier and richer, demonstrates Bike Nation.

In effect, Bike Nation is a "Go Dutch" polemic and, says Boardman in a blurb plugging the book, "it should be compulsory reading for anyone in a decision-making role."

However, as Walker shows, UK politicians, even such supposedly bike-friendly ones like former transport ministers Robert Goodwill and Norman Baker, show no signs of making the sort of transformations that will be needed for the UK to become a "bike nation". Why is this? Walker discusses this, too. It’s partly down to the mainstream view of cycling being something for others to do, something that can be safely ridiculed by newspaper columnists. Walker includes some egregious examples of the so-called "bikelash", such as bile-filled cyclist-hating columns from Linda Grant and Matthew Parris.

Such attitudes have shifted elsewhere, argues Walker, and so can be changed here, too.

Bravely, Bike Nation also tackles the divisive subject of bicycle helmets. Those who prefer to be armoured up may find this strongly-argued but contentious chapter not so much to their taste.

Can cycling save the world? Walker hopes so. "In a world dominated … by bikes, people can amble, children can play, fresh air can be breathed, conversations can be heard, all without our omniscient, noisy, smelly, lethal modern-day plague." That’ll be motor traffic, then.

He concludes: "I have yet to meet anyone who has come back from Copenhagen or Amsterdam and remarked, ‘Nice place, I just wish there had been a few more cars about.’"

Bike Nation is published by Penguin imprint Yellow Jersey Press and will be availble from 6th April, priced £12.99.