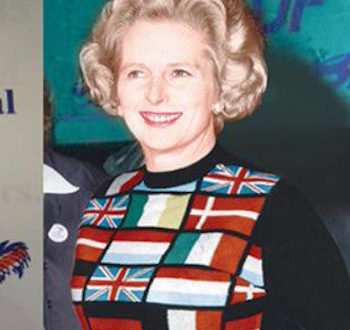 Prime Minister Theresa May models herself on Margaret Thatcher, and many on the Tory right believe they are today channelling Thatcher by destroying Britain’s links to the EU. But as we listen to May’s speech at Lancaster House in London and prepare to crash out of the single market and the customs union, ushering in a new era of punitive tariffs, red tape and needless barriers it’s worthwhile taking a look at what Thatcher thought about the single market.

In 1988 the then Prime Minister Thatcher gave a powerful speech in the same London venue in favour of barrier-free access to the European single market. The speech to business leaders explained why barriers and tariffs within Europe restricted trade, and why – with Britain leading the charge – they would be swept away with the creation of the single market. How quickly we forget.

"How we meet the challenge of the Single Market will be a major factor, possibly the major factor, in our competitive position in European and world markets into the twenty-first century. Getting it right needs a partnership between government and business.

"The task of government is two-fold: —to negotiate in Brussels so as to get the possible results for Britain; — and then to make you the business community aware of the opportunities, so that you can make the most of them.

"It’s your job, the job of business, to gear yourselves up to take the opportunities which a single market of nearly 320 million people will offer.

"Just think for a moment what a prospect that is. A single market without barriers—visible or invisible—giving you direct and unhindered access to the purchasing power of over 300 million of the world’s wealthiest and most prosperous people.

"Bigger than Japan. Bigger than the United States. On your doorstep. And with the Channel Tunnel to give you direct access to it.

"[Prior to 1973] Europe wasn’t open for business. Underneath the rhetoric, the old barriers remained. Not just against the outside world, but between the European countries.

"Not the classic barriers of tariffs, but the insiduous ones of differing national standards, various restrictions on the provision of services, exclusion of foreign firms from public contracts.

"Now that’s going to change. Britain has given the lead.

"We recognised that if Europe was going to be more than a slogan then we must get the basics right. That meant action.

"All this is what Europe is now committed to do.

"[We] can look forward with confidence to sweeping away the barriers."

Thanks to Rupert Myers for the link to Thatcher’s papers.