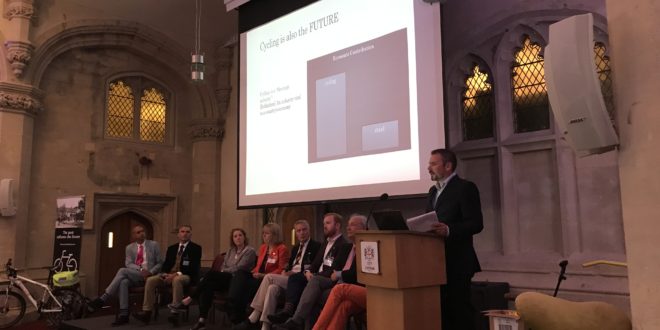 The Bicycle Association has today unveiled new research that shows the national strategic importance of cycling, and that if the government met its own target to double cycle usage by 2025 then cycling would deliver a £10 billion boost to the economy, sustaining more than 100,000 jobs.

The cycle industry isn’t currently considered to be “strategic” by the UK government. That needs to change, argues the Bicycle Association’s new report, launched today in London’s Guildhall. The Value of the Cycling Sector to the British Economy was written by Carey Newson and Lynn Sloman of the sustainable transport consultancy Transport for the Quality of Life.

The report was unveiled before an industry panel convened at the Bicycle Association sponsored International Cycle History Conference hosted in the Guildhall by the City of London Corporation. Bicycle Association operations director Steve Garidis revealed the main findings of the report in front of industry figures such as Raleigh MD Pippa Wibberley and Moulton’s Dan Farrell.

Garidis said the report revealed that the UK cycle industry is worth three times more than the UK steel industry, and employs twice as many people.  ‬Cycling related businesses currently generate at least £5.4 billion for the UK economy each year, and they sustain 64,000 jobs, some in bike shops but most in cycle tourism of one sort or the other.

A bicycle is sold roughly every ten seconds, estimates the report.

The Bicycle Association is using the report’s findings to make an “industrial case” for cycling and to stress to the government that cycling is of cross-departmental importance.

The request for cycling to be seen as broader than transport alone is already bearing fruit, said Guy Boulby at the event in response to Garidis. Boulby is head of cycling and walking in the Department of Transport’s Active and Accessible Travel Division, but he said the government was becoming increasingly receptive to the cross-departmental approach recommended by Garidis.

The BA’s report estimates that there is a 4:1 “ethical return” when consumers purchase bicycles. That is, for every pound spent on a bicycle the wider economy benefits by £4. This is calculated from net gains thanks to improved health, reduced congestion and cleaner air – issues that cut across government departments. The sale of a £450 bicycle generates national economic benefits of around £1,800.

“The UK has the opportunity to lead the world,” said Garidis.

“We can make the use of smart, clean bikes and e-cargobikes a key part of a new green transport system which can power our future economy.

“More cycling also has the potential to stimulate the economies of our cities, making them function better.”

He added that this stimulation also has a high-tech element because “by making towns and cities more attractive places for the tech industry to locate, they will be able to attract a highly-skilled, dynamic workforce.”

Garidis wants the industrial case for cycling to lead government support for the uptake of e-bikes and e-cargo bikes: “The Office for Low Emission Vehicles does not currently recognise e-bikes as ‘low emission vehicles’. The Bicycle Association is calling for OLEV to recognise the potential of e-bikes to positively impact our transport systems, and public health, and to help ensure they are seen as a priority by including them within its definition of low emission vehicles.”

Garidis also wants the government to provide financial subsidies for e-bikes: “Providing a subsidy for e-bikes, alongside electric cars, would kick-start public awareness of e-bikes and drive their mass uptake – just as they have in the rest of Europe,” said Garidis.

“This would reduce pollution, road congestion and unlock health benefits created by cycling.”

Phillip Darnton, Chair of the Bicycle Association, added: “It is time to stop being so coy about cycling. The solution is right in front of us. We need e-bikes and e-cargo bikes to be recognised as low emission vehicles and eligible for the kind of support other electric vehicles receive.”

The report unveiled today is the first of a number of research-led initiatives by the Bicycle Association. 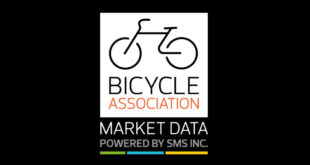