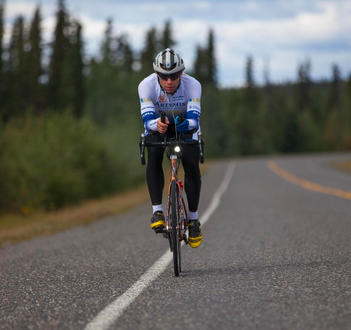 Ultra-endurance athlete Mark Beaumont has set a new world record, taking one third off the current Guinness World Record – 123 days – for circumnavigating the globe, completing the challenge in just 79 days on the Artemis World Cycle. Panaracer Tires supported Beaumont on the record attempt, providing him with Race D Evo3 tires. Beaumont used the 28mm version of the tire, set up tubeless, for the entire route.

Beaumont completed the 18,000-mile cycling challenge at Arc de Triomphe in Paris, where his journey began on July 2nd. Beaumont was also awarded the Guinness World Record for Most Miles Cycled in a Month from Paris to Perth in Australia, verified at 7,031 miles.

Commenting on the achievement Beaumont said: “This was a fantastic milestone to achieve during the challenge of getting around the world in eighty days. I hope it is used as a marker for other cyclists to go and smash in the near future.”

Replacing the tires every 3500 – 4000 miles ridden, a distance that most cyclists would not ride in even a couple of years, Mark went through one pair of tires every two to three weeks. Cycling for 16 hours per day, Beaumont travelled through 16 countries in total. The first stage saw him travel through Europe to Russia and Mongolia, culminating in Beijing.

Beaumont’s second phase through Australia and New Zealand led him into stage three starting at Anchorage, Alaska cycling through to Halifax, Nova Scotia. The final stage began Lisbon, Portugal for the final ride back up to Paris.

Over the course of the 79 days, Beaumont has faced numerous physical and mental challenges, including a fall on day nine that could have ended the whole expedition. Pedalling through Australia and New Zealand during the winter season meant Beaumont was continually exposed to sub-zero temperatures, making time on the bike even more gruelling.

As Beaumont cycled through Canada and USA, he was faced with the prospect of weathering secondary storms of Hurricane Irma. But despite these trials, Beaumont completed the ride on schedule. On finishing, the double Guinness World Record holder commented: “This has been, without doubt, the most punishing challenge I have ever put my body and mind through. The physical and mental stamina required for each day was a challenge in itself, but I had an amazing support team around me.

“The success of cycling around the world in 80 days shows that what seemed impossible is possible and has redefined the limits of endurance sport. Each stage brought different challenges including different climates, which I had to adjust to quickly. Stage one through Russia and Mongolia was unknown territory, so to complete this phase and come out with a second Guinness World Record is a real achievement.

“I am very grateful for the support I’ve received from people all over the world, from fellow cyclists joining me on the road to messages and wishes online. The experience has been incredible, and I’m excited to share this journey for years to come.”

The Artemis World Cycle also partnered with Twinkl to create lesson plans and educational material for primary schools across the globe. Beaumont still aims to raise £80,000 for Orkidstudio, a humanitarian architectural charity that he has worked with for the last decade. Donations can be made by texting ‘ORKD80 £10’ to 70070 or online at justgiving.com/fundraising/markbeaumont-80days