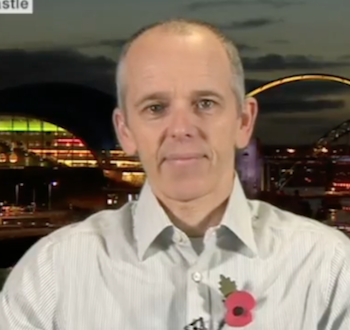 According to a local newspaper Lincoln is plagued by pavement cycling. This story was picked up by BBC Look North and the issue featured in last night’s show. BikeBiz editor-at-large Carlton Reid was interviewed for the piece by programme anchor Peter Levy.

Try as he might Levy couldn’t rattle Reid, who stayed composed as the presenter used the Jeremy Paxman method of interviewing.

Reaction to the interview on social media has been critical of Levy’s "aggression" towards a cycling guest.

"Excellent work," wrote Trevor Hughes of bike importer Vielo Sports. "I would have at the very least rolled my eyes at his consistent attempt to provoke you."

I’ve noticed how these local television presenters take a very aggressive attitude when interviewing people. You handled him well Carlton.

Wow. Well done for arguing back so sensibly. The interviewer clearly thought he was Rumpole of the Bailey & he could rile you by shouting at you. The muppet.

Wow, that interviewer certainly has some issues to sort out wrt to people on bikes. The 93% non-verbal was etched across his face.