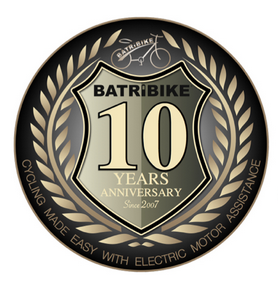 This month, Batribike is celebrating its tenth anniversary with an industry first and the announcement of a new limited-edition centre motor throttle driven e-bike.

The new Batribike Ten, named for the landmark birthday of the company, makes the connection between its high torque centre motor, and a throttle drive system for the first time allowing the combination of the two to deliver a smooth center motor e-bike experience.

Before now, centre motors have been exclusively coupled with pressure rather than rotational sensors, limiting the power assist to periods of active cycling, however this new system designed for the Ten, gives a boost from a standstill start of up to 4mph, before smoothly adding power to the riders pedal rotation for the rest of the ride.

The technology developed for the Ten combines a ProMovec 70Nm centre motor, a hidden 10.4Ah Sanyo or 13.6Ah Panasonic battery hidden in the frame, and a large central LCD with a twist grip control similar to Batribike’s Perdu and Delta models.

The new Batribike Ten will have an exclusive run of 100 bikes over two styles built in Europe and is available at the beginning of November. Batribike marketing director Sue Coulson adds: ̎This is such an exciting new bike to the range which not only offers a great new ride, but also is bringing something truly new to the market for those who enjoy a centre motor ride. It’s the perfect way to celebrate out 10th anniversary. ̎

The Ten has an RRP of £1849 and includes a three-year warranty on the ProMovec motor, an additional year on the industry standard warranty period.