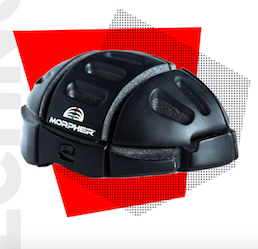 Morpher Folding Helmet has announced today that it has received investment from tennis player Sir Andy Murray, as part of its current Seedrs fundraising campaign.

Murray commented: "Morpher is a product that the modern cyclist should own – one that has been dutifully perfected by an award-winning inventor".

The helmet was desgined to combat the main issue facing the 83 per cent of cyclists who won’t wear a helmet because they find them cumbersome to carry when not in use. The Morpher Helmet is designed to fold and unfold in seconds and fits into a bag when not in use.

Inventor and CEO of Morpher Jeff Woolf says: "The last few weeks, since the launch of our Seedrs campaign, have been very exciting. Now having the world’s greatest tennis player give his endorsement by investing in our company is absolutely brilliant."

Over 4000 Morpher helmets have been sold worldwide and Morpher has patents granted in many countries as well as pending in several others. It has CE EN:1078 and CPSC safety certification and is produced by one of the world’s leading helmet manufacturers who also produces for big name brand cycle helmets such as Bell, Giro, Scott, Lazer, Specialized, Bolle, Kali, POC, Trek, Limar etc.

The money raised from the Seedrs campaign will help fulfil the demand for Morpher helmets from cyclists and distributors worldwide.

"The response to Morpher from cyclists all over the world has been fantastic. With the rise in commuter cycling and over 200 million people regularly using bike share schemes across the globe, as well as the fact that more bikes are sold than cars in the EU and US, the market for this product is simply staggering," concluded Woolf.