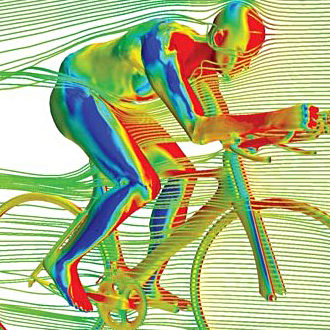 Aero apples should not be compared to podgy oranges

If we’re to believe the hype pretty much every road bike nowadays is “aero,” even if it’s never been anywhere near a wind tunnel. But just because you’ve got a slippy-through-the-air bike doesn’t mean you’ll go any faster. A bicycle accounts for 30 percent of the total aerodynamic drag involved in cycling. The rider accounts for the remaining 70 percent. And if the rider – perhaps a porky one – constitutes more than twice the drag of the bicycle and its components, why is there so much fuss about aero bikes? It’s a sales tool, of course; it’s tough to make consumers more aerodynamic, especially those podgy ones, but it’s – relatively – easy to make frames, wheels, helmets and so on less disruptive to air flow.

I’m by no means an expert on matters aero, although I do like chatting to those who are. Mike “Lotus superbike” Burrows rings me to every month to discuss the arrival of the print version of BikeBiz (when he calls I know the mag is out) and he was into aero long before others in the bike industry. (Although not as early as W. F. Keogh of New York – in 1894, he patented the Keogh Body Shield. This was "designed to aid bicyclists … by cutting the wind before them when in motion … By thus reducing the resistance of the wind to a minimum a large increase in speed is obtained.”) And I also recently chatted with Gerard Vroomen about slicing through the air. We talked, in June, at Bike PressCamp in Utah – the co-founder of Cervélo was launching the 3T Strada, featured elsewhere in this mag. This dispenses with the front derailleur and big ring, and has tubing optimised for air flow, or as 3T puts it:

“[Our] aero tubes are designed based on a series of flat 2D cross sections that connect together into a tube shape. But in the real world, the air flowing over a tube doesn’t follow a flat path, it follows an arc. So we built our Arcfoil tubes as a series of curved instead of flat Sqaero cross sections.” (Sqaero is the tube shape on Vroomen’s 3T’s gravel bike.)

Vroomen blinded me with aero science (I’m a lover not a fighter) but one of the things that stood out for me was his insistence that aero testing for bikes ridden by mere mortals ought to be done at low speeds. The standard for aero bikes in the wind tunnel is currently 30mph. His bikes are now tested at 20mph. And this is a key speed. For instance, DT Swiss has shown that the lower rolling resistance of 28mm Conti GP4000’s make them faster than 25mm GP4000’s below 21mph. Above that speed and the wider tyre has an aero cost higher than the advantages gained from the faster rolling.

("We still test at 30mph too," said Vroomen. "It’s not or/or for us but and/and. It all depends on what we want to know and who we think may ride the bike. And where, as 10mph with a 20mph headwind is still 30mph for aerodynamics.)

It’s easy to be blinded by aero science because apples are often compared with oranges. This is something that Canadian Len Brownlie has wanted to change for some time. Brownlie runs Aerosports Research, an aero consultancy business (he’s also the director of a silver mining company) and has worked on aero concepts for Nike, many pro cycling teams, Olympic speed skaters and wheel brands. He also consulted for Smith Optics for their aero Overtake bike helmet. He knows his stuff – he received a Ph.D in kinesiology and aerodynamics in 1993 having started in 1984.

In 2013, Brownlie helped Easton Cycling with a white paper on aerodynamics that called for the industry to sing from the same hymn sheet.

“This kind of analysis,” continued the paper, “leads to the claims that Product C has the least drag at 10-degrees of yaw. Or that Product D is ‘the fastest’ at 0-degrees of yaw. These figures, while potentially accurate, don’t actually make much sense to consumers who generally can’t recount the yaw angles they encountered on their last ride. Nor do these figures answer the question of which product is actually the most aerodynamic overall, that is, in most conditions.”

Easton called for the industry to adopt as its standard Wind Averaged Drag (WAD). This is an analytic tool originally developed in the automotive industry during the energy crisis of the 1970s by researcher Ken Cooper who worked on the effects of drag on a car’s fuel-efficiency. WAD aggregates the drag measurements from several yaw angles into a single “wind averaged” measure of drag. Cooper argued that if engineers wanted to make a car more aerodynamic and energy efficient at motorway speeds, they should focus on reducing drag at the yaw angles a car actually experiences at motorway speeds.

Wind Averaged Drag was introduced to the cycle industry in 2009 by Brownlie, starting with the testing for Giro’s Air Attack helmet.

“Consumers seeking an aerodynamic edge need a single metric to help them determine which product is best for them,” believes Brownlie. “Wind Averaged Drag is perfectly suited to this. It is accurate. It makes sense.”

In Easton’s white paper, the wheel company called for other cycling brands to adopt the WAD formula, something called for by Brownlie in an Easton-sponsored scientific paper from 2010. “We are advocating for a set of ‘best practices’ for wind tunnel testing,” said Easton. That argument was right in 2010 and 2013, and it remains right today.