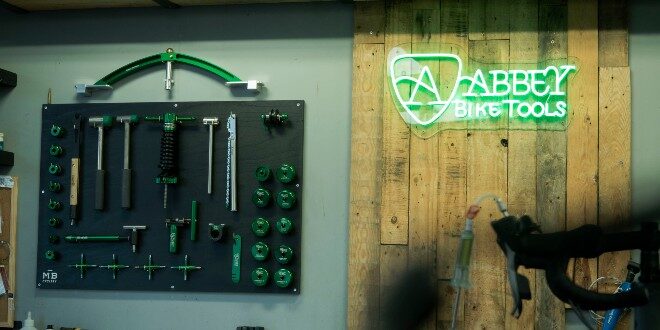 Abbey Bike Tools has teamed up with Saddleback for exclusive distribution in the UK and Ireland.

Abbey Bike Tools was founded in 2012 after race mechanic Jason Quade created a new device for checking lockrings and swapping cassettes, without removing the quick release skewer. Designed at the request of friend and fellow pro mechanic Jeff Crombie, the Crombie Tool was born. Word of mouth soon spread amongst pro mechanics in the pits, and a year later four different teams, including eventual victor Team Sky, used the Crombie Tool at the Tour de France.

Since then, Abbey Bike Tools, based in Bend, Oregon, has expanded its portfolio off the back of Quade’s experiences and those of his friends on the pro circuit. Quade says his motivation for creating tools is to ‘forge connections with mechanics and see their faces when they use the brand’s products’. These include the Crombie Tool, the Hanger Alignment Gauge (or HAG) and the Harbour Gauge.

Quade said: “The thing that stuck out about Saddleback was their intention to not be everything to everyone. They don’t have a desire to be a one-stop shop for all your bike needs, they want to build longer-lasting relationships with some very cool brands that they’re passionate about… We’re a pretty loyal company to our customers, to our vendors and our sales partners, and Saddleback just seems to be a great fit into that mix.” 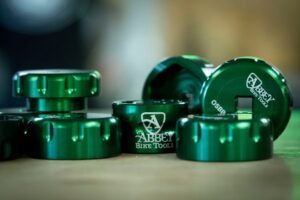 Saddleback brand director Richard Mardle added: “We’re delighted to partner with Abbey Bike Tools to distribute their signature green products in the UK, Irish, German and Austrian markets, and open the product up to further European markets in the coming months.

“We only ever work with brands who we can cooperate closely with and whose products we aspire to own ourselves, and that’s certainly true of Abbey Bike Tools. Their name is a recognised emblem of discernment, quality and expertise in any workshop. We look forward to making these incredible products more easily available to shops and home mechanics throughout the bicycle world.”

Abbey Bike Tools’ product is en-route to Saddleback right now and will be available imminently at Saddleback.co.uk.

Saddleback was today announced as a finalist for P&A Distributor of the Year at the BikeBiz Awards 2021 in association with Tannus Tyres. Read the full shortlist here.