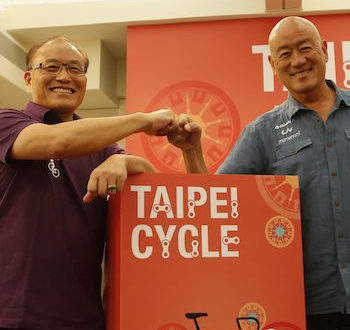 The 2017 Taipei Cycle will be the thirtieth staging of the event. The Spring show will move to the Autumn in 2017, confirmed the organisers as new branding was unveiled.

The new brand identity – “A New Worldview on Cycling" – was unveiled by Peter Huang, the CEO & President of TAITRA, and Giant’s Tony Lo, the chairman of the Taiwan Bicycle Association (left and right in the pic).

The show is organised by TAITRA, the Taiwan External Trade Development Council, and the 2017 event will be staged 22–25 March at the Taipei World Trade Center, and opens with a Demo Day, the show’s first. In 2018 the show will move to the end of October and early November.

At a press conference Tony Lo said that the value of Taiwan complete bicycles export in 2016 has dropped 20 percent so far this year.