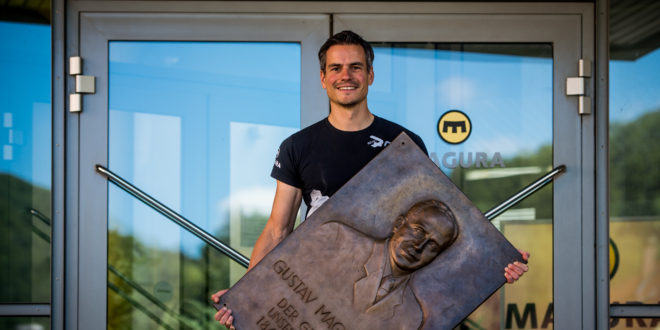 Magura celebrated its 125th anniversary last year, a significant milestone in any company no matter how big or small. From the gear rack for steering columns, still a symbol in the company’s logo today, to the manufacture of electronics and high-tech synthetic materials developed in-house, a lot has happened since it was founded. Fabian Auch, fourth generation of the Magura owner family, celebrated the milestone with employees from all around the world, in a one-day party that took place in Germany where it all started.

The company was founded by Auch’s great grandfather Gustav Magenwirth, who was born in Bad Urach in 1866. An apprentice and later employee of engine designer and automobile engineer Karl Benz, Magenwirth became a manufacturer of engines, hydraulic pumps and synthetic materials as well as motorcycle and bike components.

He invented one of the milestones in the company’s history, the straight-pull control lever blade for motorcycles, which led to a cooperation with BMW in the motorcycle sector that still exists today. Auch is now the managing director in the family-owned holding, home to Magura and electronic company Bebro, and has been in the company since 2011. It was passed down to him from his father, who had it passed down to him from Magenwirth’s daughter. The combination of tradition and progress at Magura is characterised by the fact that Magenwirth’s family home is now used as the headquarters of the holding company Magenwirth Technologies in Bad Urach.

Despite stepping back in the company, Auch’s father is on the council and he is still a main shareholder. Auch himself has spent the last seven years in several positions within the company and he’s also involved in the electronics side, as he aims to learn a bit more about each part of the business so he can make progress in his holding position.

This tradition of each generation taking over to keep it in the family is “typical Magura”, Auch says, even if it won’t always continue in that way: “That’s the way my father did it when he stepped into the company, but it’s not necessarily the only style that’s possible.

“First of all, we want to continue the long history of the company and also the tradition and the core values, we have done that since the beginning. On the other hand, I think we’ll have to change a little, depending on what the market is demanding, as we have for 125 years. We want to stay in our core competence, which is components for motorcycles and bicycles, but you never know if there’s going to be another topic that pops up in the future that we have to follow.”

In 1957, Magura took over a synthetic materials injection moulding shop for the development of its own products and designs. Today Magura produces in the state-of-the-art factory in Hülben, where the Carbotecture and Carbotecture SL materials are developed and manufactured in-house.

At the Hengen plant, 130 employees produce bicycle brakes, motorcycle components and industrial parts. Magura now divides its business activities into four segments: bikes, powersports, controls and composite, and when looking back over the last 125 years, Auch says the changes and developments that Magura has made over this time is a highlight in itself.

He says: “We can see the changes that we’ve made when we look back at the last 125 years and then compare it with the last few years. One thing for sure is that the changes are getting faster and faster and it affects us more in a shorter space of time. I think that will continue, especially now with e-mobility.

“E-bike is not a hype, it’s a real business, and we can see the growing businesses for the future, with e-MTBs and e-cargo bikes and whatever else comes up there. There is a lot of discussion about the commercial e-bike applications in the cities and all these transportation forms, whether it will be two wheels or three wheels or four wheels, and they will all need to have a good break and that is our chance.”

Even with motorcycle components, Auch wants to cover all mobility solutions, including the components that already exist and the ones that will exist in the future, as he says: “Since 1923 we have been the supplier of BMW motorcycles, which is also one of our core competencies. The electronification is going to start soon and I think that’s going to happen very quickly, so you have to take your decision on which direction you want to take.”

Auch says that roughly every 25 years, Magura has had to drastically change in the business: “Gustav started with motorcycle components, and then the business grew and so did motorcycles, especially in Germany.

“And there was a time when these vehicles went down a little so Magura had to change, and then we became the supplier for Volkswagen. This business took another ten years and then we had to change again, and then finally in the 1980s we came into the bicycle business with the hydraulic rim brake.”

Over the last 30 years, Magura has transformed itself from a newcomer in the bike sector with the development of the first hydraulic bicycle brakes in 1987 to a technology leader in the industry: “We came up with the hydraulic disc brake, and since then the bicycle is now the biggest part of the business. I think the changes that we had to make and also the success that we had in these changes is a highlight in the history”, Auch explains. “Right now we are in motorcycles and bicycles so the next phase will be e-mobility solutions.”
Magura has created innovative ideas for e-mobility and is continuously developing existing components such as an electronically-controlled seatpost.

In 2016, the wirelessly adjustable seatpost, the Vyron Elect, became a highly successful product on the cycle market, and since 2017 Magura, ZF Friedrichshafen and other companies have combined their strengths in a joint venture to promote e-mobility, providing technological impetus in a key future market. The common goal is to develop, manufacture and sell products to support growth.Auch says: “I think the biggest highlights in the last 25 years have been, on the bicycle side, the hydraulic rim brake and the hydraulic disc brake. More recently, we also came up with the Vyron seatpost. At the same time, we also grew in the motorcycle components, with the clutches and brake systems, especially for BMW, so product-wise those have been the highlights.

“I think that’s going to be the direction that we’re going to continue with, whatever comes up as a component that fits this portfolio. We are open to finding new ways, new components and new solutions for our partners to help them become part of the mobility world.”

The importance of e-mobility for Magura is shown by the company’s numerous innovations and products in recent years. Together with Bosch, the first ABS system for bike brakes was developed and it has been available on the market since 2018. Bosch supplies the control system, and Magura supplies the knowledge and technology for the brakes. To celebrate 125 years of Magura, the company released an anniversary brake that has been produced as a special edition in wooden packaging, with the anniversary logo engraved on the master and caliper. The MT1893 was made as a limited edition only for the aftermarket.

Magura also hosted a huge one-day party, where there was a total of 726 employees from around the world in one place to join in the celebrations. “We did two parties, one was a party for our external guests, and then we had a party for all the employees, not only for the German part of the company but for the worldwide organisation”, Auch says.

“It was good for everybody to meet and that was our target – to bring together all these people that know each other maybe by email, telephone or Skype but have never actually seen each other face to face”, he says.

“We had 82 employees from Magura Asia over here in Germany, and they knew how to party. That was the fun, to be able to celebrate, talk and spend time with them. We had people from the US, Germany and other European countries, and we had a really good time and it was also a chance to come closer and to get to know the company team.”

Looking to the future, the company aims to continue for another 125 years at least. “That is one of our long-term goals, to keep the company going for the next generations,” Auch concludes. “We don’t know how we’re going to do that exactly, but we all know we want to do it. That’s going to be one of my tasks for the next few years and decades, to be part of that continuation.” 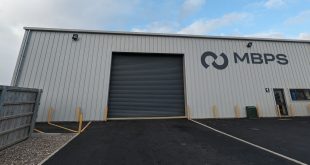 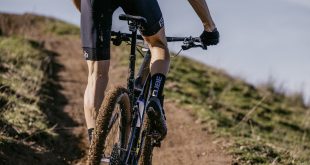 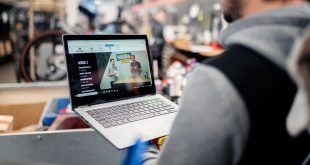