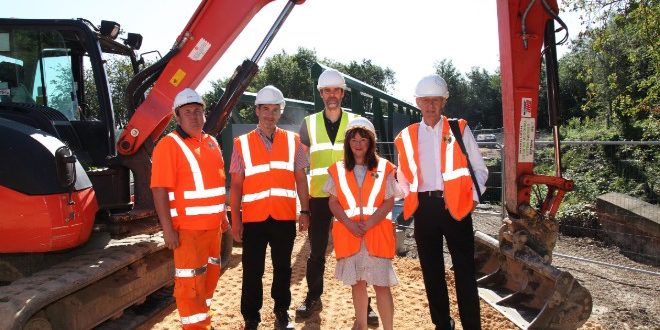 Councillors visited the Castleford Greenway this week to see the start of construction on the next phase of a £1.2 million scheme to enable more people to cycle and walk.

Councillor Kim Groves, chair of the West Yorkshire Combined Authority’s Transport Committee, and councillor Peter Box, leader of Wakefield Council, were on a site visit to look at the works which are being delivered through the West Yorkshire Combined Authority’s CityConnect programme, aimed at encouraging more people to travel by bike or on foot, in partnership with Wakefield Council.

Construction has been underway on a section of the route, which will provide a traffic-free link between Castleford and Methley by extending the Castleford Greenway over a new bridge across the Hallam Line. The new foot and cycle bridge was lifted in earlier this month through works undertaken by AMCO Giffen. The bridge is 32 metres long and three metres wide.

The Castleford Greenway forms part of Route 69 in the National Cycle Network, which was created by Sustrans and includes over 16,500 miles of cycle and walking routes across the UK. The completed Greenway is part of work to develop and improve the Network in Yorkshire and will link to local routes.

The work in Castleford links to the Castleford to Wakefield Greenway being delivered by the West Yorkshire Combined Authority in partnership with Wakefield Council, which, when complete, will create a 16-kilometre route by providing missing links in existing infrastructure.

Groves said: “We’re delighted to be working in partnership with Leeds and Wakefield Councils and Sustrans on the next phase of the Castleford Greenway, which will provide more people travelling by bike or on foot with a safe, scenic traffic-free route all year round.

“This route provides a vital link for the people of Castleford, making it easier to access Wakefield, the Trans Pennine Trail and the Wakefield Wheel.

“As well as providing missing links in local cycling and walking infrastructure, the Castleford Greenway – alongside other schemes across our region – are helping open up access to some of our best countryside, and once complete will be an exemplar scheme nationally.”

“This is an important piece of work to further enable residents from Wakefield to Castleford to use sustainable transport as it will provide additional cycling and walking paths,” added Box. “Use of sustainable transport is one of many ways to combat the scourges of climate change and I am pleased that Wakefield Council can be a part of these measures.”

Steven Best, Sustrans’ construction manager for the project said: “We’re excited to be working with CityConnect on developing this important new section of the Castleford Greenway and a key route for the National Cycle Network in Yorkshire.

“We’ll be working on surfacing the route, opening up access and installing signage on the path. The new completed Greenway will open up access to a traffic-free path for all abilities to walk and cycle, including people on mobility scooters or adapted bicycles. It will be a fantastic example of what we aim to achieve long term across the network as part of our work throughout the UK.”

The first section of the new Castleford to Wakefield Greenway, a two-kilometre stretch between Fairies Hill Lock and Methley Bridge in Castleford, opened in March 2018.

Watch footage of the new bridge being lifted in at here:

The Castleford Greenway project is due to be completed this winter.