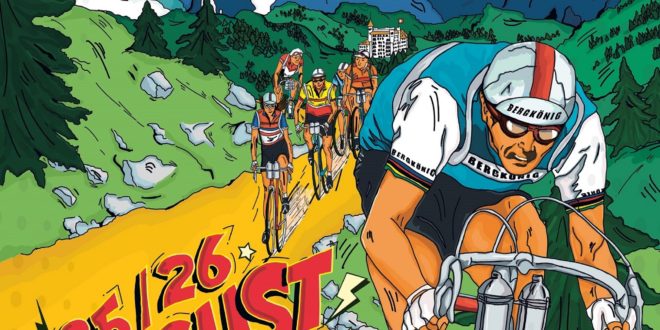 The second BERGKÖNIG Gstaad will take place on August 25-26th and half the available entries have gone already. Multiple world champions
Urs Freuler and Albert Zweifel are confirmed to ride this year, following the attendance last year of Freuler and Gilbert Glaus.

BERGKÖNIG’s formula for success consists of small, demanding mountain roads with lots of climbing, alpine panoramas, local food along the parcours and a base in the legendary chic of Swiss alp village Gstaad.

The organisers of the BERGKÖNIG Gstaad didn’t know if a high-mountains sportive would work, especially given the gearing of many classic bikes, some boasting a lowest ratio of 42 x 22. But they say the 2017 event was a resounding success, based on a formula of narrow mountain roads mixed up with holes, cowpats and gravel sections, to give a serious sporting challenge.

The ‘Big Round’ consists of 102kms and 2,400 metres of climbing. Around it are gentler routes permitting a friendlier aspect and the inclusion of otherwise fragile bicycles.

One of the highlights of the cycling festival happens on the Saturday evening: a short sprint from Gstaad’s pedestrian area to the somewhat higher-up world famous Gstaad Palace Hotel, followed by an aperitif reception for all participants.

Eligible for BERGKÖNIG Gstaad are classic bicycles older than 1990 with traditional downtube shifters, to be ridden in period clothing such as wool jerseys and leather shoes. Bicycles will be judged by a jury, and trophies awarded for 12 categories.

The event registration fee is 130 CHF, (approximately £100/ €110) which includes the aperitif at Gstaad Palace, all catering along the routes and a raclette party after the arrival, plus a memorial medal. Entries are limited to 500 and the first year of the event was oversubscribed.