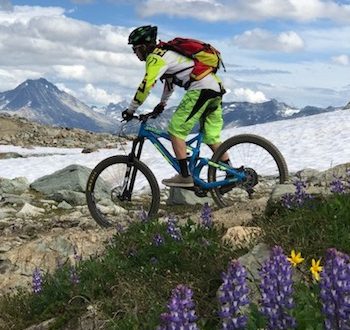 Whistler in Canada’s British Columbia has long had the world’s best gravity park but with the opening of new backcountry trails it’s now positioning itself as more Alpine than the Alps.

Five years in the building, the new trails on Mount Sproatt and Rainbow Mountain extend the resort’s reach. Those who crave XC ascents before their downhills, or who don’t want pay for lift tickets – or who want heli-biking without the heli – can now ride through tree-lined switchbacks via Alpine meadows to singletrack trails beneath jagged peaks.

Officially opened at last week’s Crankworx MTB festival, the steep alpine trail network was built, with government assistance, by Whistler Off Road Cycling Association’s Dan Raymond in association with the Resort Municipality of Whistler and the Alpine Club of Canada.

Raymond has camped out on the trail for much of the past four years, and his campsite can still be seen at the top of Mount Sproatt.

BikeBiz hired resort GT Sanction enduro bikes to see the 24.6 kms of trails up close. Joining the Into The Mystic uphill and the 6.9kms Lord of the Squirrels descent the new trail system was originally known by the working title of "Alpine Dream Trail."

Starting from the eateries and bike shop at Function Junction the trail is a 25-mile loop from the centre of the Whistler resort, with an ascent of 5000 feet.

The trails feature rock slabs, plenty of North Shore style wooden bridges and there are even impromptu swim spots in ice-cold lakes.

The new trails – currently dotted with wild flowers – mark phase one of an ambitious project. Future plans include other trails heading north to Hanging Lake and back towards the Callaghan Valley.

Whistler is a popular MTB destination for international visitors, including Brits. While village accomodation is usually super-deluxe (there’s a cheap-as-chips youth hostel 20 minutes out of town) a new "pod" hotel is soon to be open in the centre of the village, and this will widen the resort’s appea. According to the developers, the Pangea Pod Hotel is an "affordable yet boutique property offering private Pods that are both cozy (think natural wood finishes) and well-equipped (cue USB ports) within a chic, laid-back setting."

The expansion of Whistler’s trail network away from its gravity beginnings is, in part, a way to showcase mountain biking with organisations such as British Columbia Parks, which, since 1989, has restricted use of MTBs on its lands.