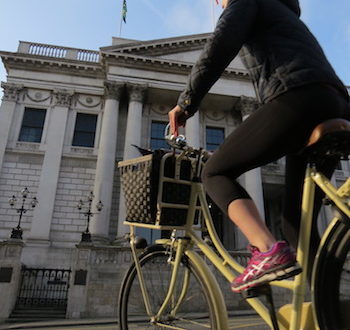 Dublin will be the host city for Velo-City 2019. The cycling conference is organised by the European Cyclists’ Federation. The Republic of Ireland capital has recently made a strong committment to building up the city’s cycling culture, including installing dedicated cycling infrastructure.

ECF Secretary General Bernhard Ensink said: “We are excited to bring participants from all continents in 2019 to Dublin. Velo-city 2019 Dublin will offer a great opportunity for sharing the experience, knowledge and expertise about the promotion of cycling worldwide."

Dublin’s bid, led by Dublin City Council, displayed strong political commitment on all levels, from local to national, said a statement from ECF.

Velo-city Series Director, Marcio Deslandes, said: “Dublin is a great example of a city moving towards a more livable, safe, and active environment for its citizens.”

Dublin hosted the conference in 2005.

Dublin City Council CEO Owen P. Keegan said: “The number of cyclists in the city has increased by 147 percent since 2005, and the conference showed that cycling was a real and viable mode of transport for Dubliners."

He added: “Hosting Velo-city in Dublin in 2019 will accelerate the efforts by Dublin City Council and our partner agencies to further the development of Dublin as a world class cycling city.”