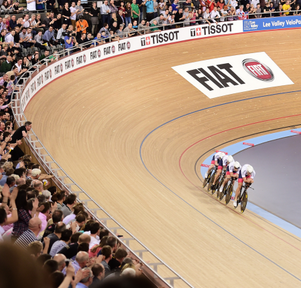 The 2016 UCI Track Cycling World Championships, held in London, has been nominated for Best Sports Event at the 2017 Sports Business Awards.

The 2016 event was the biggest in the long history of track cycling with over 52,000 tickets sold across the event. The Great Britain Cycling Team topped the medal table, winning nine medals, providing the springboard for success at the Olympic Games in Rio six months later.

The competition attracted 4.7 million UK viewers and 10.1 million worldwide with a digital reach of 13.3 million.

British Cycling’s director of cycling Jonny Clay said: “The 2016 UCI Track Cycling World Championships was a fantastic event and selling over 52,000 tickets demonstrates just how popular cycling in this country has become. The atmosphere in the velodrome was incredible and it was undoubtedly one of the stand-out sporting events in the UK in 2016.

“We also recognise at British Cycling, that events of this profile provide a unique opportunity to inspire more people to take up cycling which was why getting the legacy programmes in place was such an important part of the project.”

The awards will be held in London on Friday, June 2nd.