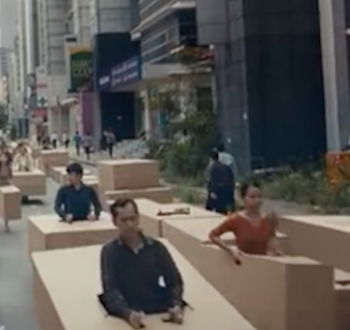 Uber in Asia has launched a video showing the stupidity of using boxes to get around the city. In this case they are cardboard boxes and aren’t fully car-shaped. However, the tactic of portraying cars as space-inefficent is one much used by cycle campaigners.

In the 1970s, cycle-advocacy group Le Monde à Bicyclette protested against car use by cycling around Montreal on bicycles made car-sized with lightweight plywood frames. Similarly, in 2014 the Let’s Bike it! campaign of Riga, Latvia, cycled through morning rush hour traffic with bicycles taking up as much room as cars.

Uber launched a video on 31st October to promote its "unlocking cities" website and campaign.

"Ridesharing services have changed the way people move around cities across the world," claims the company, urging city authorities to favour "space-efficient" services such as Uber over the use of private cars.

The space inefficiency of private motoring has even been used by the automotive industry. In 2003 Goodby Silverstein & Partner produced the "sheet metal" advert for the Saturn car brand which featured people "driving" around the city without their cages.