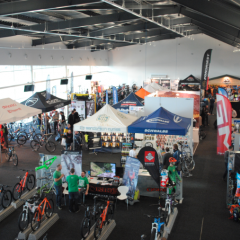 The Bike Channel confirms filming at the 2017 Bike Place Show

The Bike Channel has confirmed that it will be filming at the 2017 edition of the Bike Place Show.

A 15-minute highlight package will be broadcast on the cycle specific television channel, which is available to watch via Freesat on channel 251, Sky on channel 464 and Virgin Media on channel 552.

The show will be repeated ten times on the channel throughout the weeks following the show. Select clips will be uploaded to social media and will be available to watch on the Bike Channel YouTube page.

The Bike Place will be back at Silverstone circuit in January for its seventh show. The organisers have confirmed that the event will appear in an expanded format for 2017, and will now cover three full halls in The Wing Building between January 29th and 31st.

The show will also feature a number of new exhibitors and brands that will display their latest products, including i-Ride, Orbea, Polaris, and X-Bionic. Show veterans Santa Cruz, Velobrands, Orange, and Oxford are also confirmed to appear.