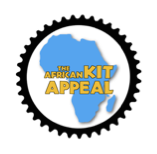 The African Kit Appeal has announced the latest national charitable drive, which aims to send unwanted cycling kit to every country in Africa.

The appeal received a strong and positive response from the industry and its supporters in its first year and due to this success, the company is now aiming to reach every African country with the current 2016 to 2017 kit drive.

Team Dimension Data rider Matt Brammeier first launched the original appeal at the beginning of 2016, when the rider realised that after years of professional cycling, he and others in similar positions were left with masses of both used and unused kit at the end of each season.

The rider launched the appeal to utilise the large quantity of unwanted cycling kit being either thrown away or forgotten about, and resolved to send it to those who may appreciate it far more in African countries.

Founder of the appeal Matt Brammeier commented: “We as a team are super excited to have the support of both AirBusiness and Zwift. Last year was such a success, and now we are determined to reach each and every country in Africa, to give young cyclists the kit they need.

“We are extremely thankful to the cycling community for all of their support and we can’t wait to see what response we receive in going through to 2017.”

The Africa Kit Appeal is also searching for cycling clothing companies that might have extra, unsold kit that they are willing to donate. To find out how you can donate, visit here.