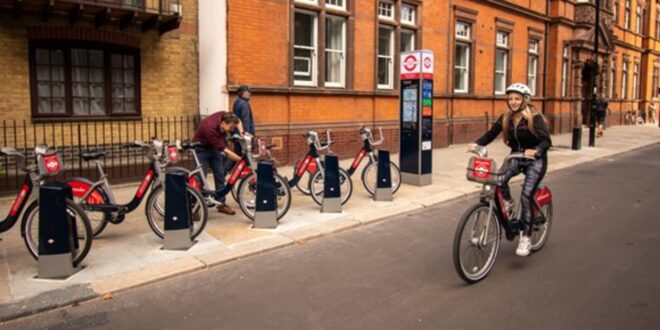 TfL’s cycle hire scheme Santander Cycles has recorded the highest ever number of hires in the month of February with 750,000 hires made last month, an average of almost 27,000 per day.

January was also a record month for the scheme, with 748,000 hires, or 24,000 per day.  This follows on from record months in September, October, November and December last year, as well as a record number of hires across the year in 2021.

TfL and Santander said they are continuing to work on upgrades and improvements for the scheme this year. They are expanding the cycle hire scheme to new areas of London and are working closely with Southwark Council to add eight new docking stations across the borough. They are also working to introduce around 500 electric bikes into the scheme from this summer.

Will Norman, London’s walking and cycling commissioner, said: “What an incredible, record-breaking six months it has been for Santander cycles. I’m delighted that 750,000 rides took place in February, the highest ever number of rides in that month, echoing the wider trend of ever-increasing numbers of Londoners choosing to cycle.

“We know that many people took up cycling for the first time or returned to it during the pandemic, and we are determined to keep Londoners cycling and build on this further. This includes introducing electric Santander Cycles to the network and expanding the scheme to new areas to help ensure a green and sustainable recovery for our city.”

David Eddington, TfL’s head of cycle hire, added: “Our popular cycle hire scheme has gone from strength to strength and we’re delighted to have recorded six record months for the scheme in a row.

“The scheme has played a vital role helping millions of Londoners commute to work, explore the capital and exercise, as well as helping thousands of Londoners try out cycling for the first time.

“We’re looking forward to introducing electric bikes and expanding our iconic cycle hire scheme this year, so even more Londoners and visitors can discover the benefits of cycling in the capital.”

Dan Sherwood, director of marketing at Santander UK, said: “It’s fantastic to be celebrating breaking records again as we continue to support communities to stay connected and mobile in a healthy and sustainable way.

“We’re delighted to continue our support for key workers with a free code scheme in 2022 and look forward to another great year.”

Santander Cycles is also continuing to support NHS staff and key workers by offering free cycle hire access codes, with more than 168,000 free 24-hour access periods given out to NHS and keyworkers since March 2020.