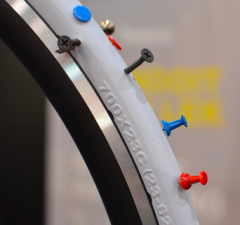 Tannus Tyres has commented on its recent debut at the Taipei International Cycle Show.

According to the brand, its presence at the show facilitated a series of successful talks with numerous distributors and bike manufacturers. Tannus is currently exploring how these brands can work together to promote cycling and the use of airless tyres.

Walia commented: “There are some of the biggest names and brands in the cycling industry there and we were flattered to have a lot of interest from many of their representatives.

“It’s all about networking at the moment, so nothing is agreed but there were of lot of very positive conversations which leave me very optimistic.”

As well as talks with major bike brands and suppliers, Tannus also met with a number of Asian city bike-sharing schemes with whom Walia discussed the release various new Tannus products which will begin to hit bike shops over the next 12 months.

He said: “There’s a lot of very exciting new things going on in the development of new products that we will be talking about very soon. Confidence in Korea is very high and it is going to be a big 12 to 18 months in terms of progress.”