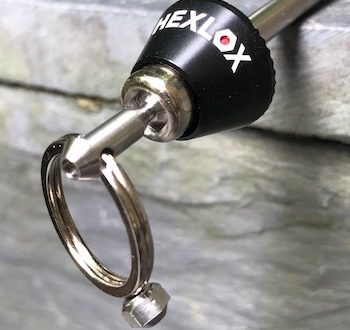 The patented-product HexNut joins the Hexlox family of cycle security products. Originally launched on Kickstarter – the system raised €116,290 from 1,916 backers – Hexlox is a magnetic stud placed into bolts and removed with a tiny key. The innovation was created by an Australian inventor and was commercialised by Swedish entrepreuneur Marcus Tonndorf. (Hexlox is based in Germany.)

Hexlox now offers the classic Hexlox – in 4mm, 5mm and 6mm – as well as a skewer line and a seat-post bolt.

Tonndorf said: "Over 60 bike shops directly signed-up to stock the brand in less than three months. It’s been an amazing ride since launch on Kickstarter. With over 25,000 Hexlox kits sold worldwide and great reviews, we are solving the problem with bike part thefts in an elegant and smart way."