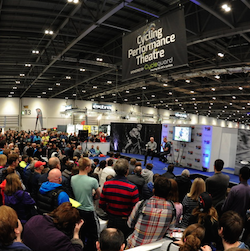 The Riders Lounge at the show will host some of the brightest emerging talent in competitive cycling, and will present a rare chance to hear stories and discussion from the likes of six-time Olympic gold medallist and former track star Sir Chris Hoy, Sean Kelly, former world champion Stephen Roche, Graham Obree and cycling advocacy icon Chris Boardman.

Britain’s most decorated female Paralympian Dame Sarah Storey will also be on hand to discuss her extensive sporting experiences.

Many of the world’s biggest cycling brands such as Factor, Cervelo, Pinarello, Scott, Rose, Dolan, Canyon and Boardman will offer the public the chance to see, try out and ask questions about their latest innovations.

Canyon – who will be showing a selection of its 2017 bikes for the first time in the UK – will be bringing National Road Race Champion Hannah Barnes to talk about the new bikes and what it takes to become a national champion. Wiggle-High5 pro cyclists Grace Garner and Amy Roberts will also be on hand to share their insights from the Women’s Tour Peloton.

For more information on the show and how to get tickets, visit the website here.