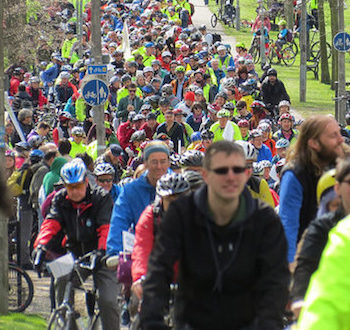 The volunteer-organised Pedal on Parliament group is crowd-funding for £3,000 to organise this year’s rolling demonstrations in Aberdeen, Edinburgh and Glasgow. The family-friendly demos were started in 2012.

£680 was pledged within hours of the campaign going live.

"Party leaders have ridden with us [in previous years]. We’ve made the news. We’ve had a joyous cavalcade of children, parents, police, grannies and dogs on one, two, three or four human-powered wheels," says the campaign’s crowdfunder.

"This year, we are making Pedal on Parliament bigger than ever ahead of the local elections in May. We are planning protests in Aberdeen and Edinburgh (April 22nd) and Glasgow (April 23rd). It turns out that this is quite a lot more expensive than you’d think, so we need to raise some money."

The money raised will help to fund banners, posters to print, stages and PA systems.

Pedal on Parliamant wants Scotland’s politicians to sign up to an eight-point manifesto:

Unique in the UK – and largely thanks to many years of lobbying by the Spokes campaign group, Edinburgh City Council spends ten percent of its transport budget on cycling.