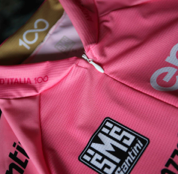 Santini Cycling Wear and the Corsa Rosa are continuing their long-standing relationship, as leaders of the various classifications are set to don jerseys created by the historic brand.

With 45 days to go until the start of the Giro d’Italia, RCS Sport and Santini Cycling Wear have unveiled three of the four official jerseys for the 2017 Corsa Rosa which begins on May 5th.

Santini SMS has been designing and making the prestige Giro d’Italia jerseys since 1993. “This goes beyond a straightforward collaboration between ourselves and RCS Sport,” said the Bergamo company’s CEOMonica Santini. “Because both our brand and that of the Giro d’Italia are two prestige made in Italy products and we feel it is important to continue this journey together, especially in the year it celebrates its 100th edition.”

The four official 2017 Giro d’Italia jerseys were entirely designed and manufactured in the Maglificio Sportivo facility in Lallio. Made from high-tech SITIP Bodyfit and Rudy fabrics with the Bergamo company’s signature expertise, they represent the state-of-the-art in cycling clothing. The stage race’s four top riders will also don the jerseys.