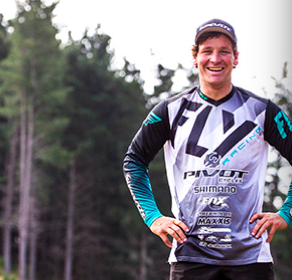 Pivot Cycles and Pivot Factory Racing have announced that Rupert Chapman will be added to the team roster for 2017.

The New Zealand-based rider is no stranger to international competition; he has been racing downhill for over 12 years and begun his career as a junior. Chapman has multiple World Cup seasons under his belt, both in youth and pro competition; this includes numerous strong finishes on the professional circuit. He currently holds the number one spot in the New Zealand National Downhill Championships.

“I’m really pumped about representing Pivot Factory Racing in 2017 and beyond. I’ve always admired Pivot bikes around the pits and now that I’ve finally started riding them, I can say that they exceed my expectations,” commented Chapman.

The rider has spent the last few years working in construction in the off-season to pay for his international program. 2017 will be the first season that he receives full financial support. “Not having to slave away on the building site while trying to fit in training will be really good for my racing,” he said.

Chapman has signed a multi-year deal with the team. Pivot Cycles marketing manager Carla McCord commented: “Rupert is a great fit for our team. We really enjoy working with young, talented athletes. Helping them to make the next leap in competitive achievement through supporting them with incredible equipment is what we do best. Rupert is already successful and we think that he has a strong future in World Cup Downhill racing.”

Chapman joins Bernard Kerr and Emilie Siegenthaler on the Pivot Factory Racing Team. All three riders will be competing on the Pivot Phoenix DH and Pivot Firebird models at World Cup and Crankworx events.