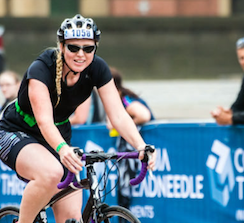 The countdown to the Coloumbia Threadneedle World Triathlon Leeds has begun as details of this year’s routes for the elite and amateur events are released.

The UK Sport National Lottery funded event – which is organised by the British Triathlon in partnership wth Leeds City Council and the International Triathlon Union – has revealed new and improved routes to be followed by over 5,000 amateur triathletes and the official route for the ITU World Triathlon Series.

More than 2,000 entries have already been sold in the amateur events; the new improved routes for the sprint and standard distance courses have been designed to maximise the racing and overall event experience.

Amateur triathletes will complete a 150-metre swim in Waterloo Lake in Roundhay Park, before taking on a new bike route that takes participants towards Headingley before turning to Roundhay Park, where they will rack their bikes in a single transition hub.

The final leg will see participants embark on a 10km run towards the city centre where they will experience the crowds of spectators on the Headrow before finishing in from of the grandstand on the blue carpet.

Olympic silver medallist Jonathan Brownlee said: “The route shows what an exciting race the Columbia Threadneedle World Triathlon Leeds will be for spectators. The multi-lap bike course goes into the heart of the city centre making it really technical and spectator friendly with plenty of opportunities to watch the racing.

"With an iconic finish in Millennium Square, it’s going to be brilliant. It’s always great to have the triathlon community out in force and if you love triathlon then you need to join us in Leeds in June.”

Chief executive officer at British Triathlon Jack Buckner added: “The 2017 Columbia Threadneedle World Triathlon Leeds is going to be the best organised, and most enjoyable triathlon event in the UK this year. We have given careful and detailed consideration to every single element of the event and will deliver a world-class triathlon experience for every triathlete.”