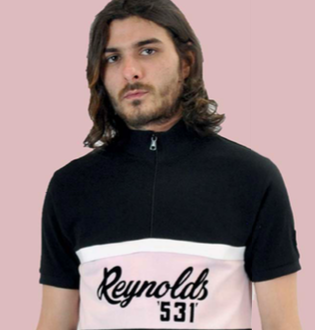 A new casualwear line in partnership with Reynolds is on its way. Mike Smith, owner of Foundry Brands, tells me the story behind it.

After successfully marrying Brick Lane Bikes with Heritage Apparel, a London licensing business has taken things up a notch, bringing Reynolds together with influential menswear retailer Oi Polloi via Heritage Apparel. “Cycling is becoming very relevant in men’s fashion – there’s a real crossover between what guys wear and the bikes they ride,” says Mike Smith, Foundry Brands owner. “Bikes have become part of the language of fashion; you go into a [clothing] shop and bikes are often part of the display.”

Foundry Brands was looking for a license that meant something in cycling and had a real heritage, but was brand-neutral. Smith was told by a number of industry experts that cyclists are very loyal. “If a guy rides a Specialized bike, he wants to wear a Specialized shirt,” he says. “Cyclists are geeky – they’re really into technology and the whole story behind it. Reynolds has got that heritage.

It’s been involved with more Tour de France-winning bikes than any other tube brand. I found that it had this amazing archive of artwork. It’s also a British brand, and that means so much in design around the world. It has a real heritage in manufacturing. I spoke to the guys there, and they didn’t really get it at first – it took a little while to get them onboard. One of the owners of Oi Polloi is really into vintage bikes, and he told me he’d thought about collaborating with Reynolds a number of years ago. All these heritage brands are really meaningful to our generation. Like me, he felt that cycling’s so important to younger consumers now, it’s fashionable and relevant, and as a nation, we’re great at it.”

Centred on 531, the non- performance wear collection is still quite small, and does not make use of sports fabric technologies. “It’s more about guys who are into cycling and its heritage. Guys who are into bikes, not necessarily racing them. That was the thought behind it,” Smith tells me. “Certainly within the fashion world, cycling is quite centred on vintage, handmade bikes, and heritage. Brands like Rapha, for instance, are

‘cool first, performance second’. What they’ve done is amazing with regard to attention to detail and authenticity. A lot of people go to them because they’re cool first, not because it’s a high-performance product. The guys who go to them are interested in both cycling and fashion: that’s the kind of market we’re targeting, but at a lower level. Because this brand has real heritage to speak about, it’s important. There’s some really good collateral to use as a reference point. It means something. Guys will say ‘that’s nice, and it’s Reynolds’.”

Smith notes that steel tubing company Columbus has a similar collection of t-shirts with logos printed on them, sold by a number of cycle retailers across the UK. “I came across them at the Bike Expo. [Retailers] sell them because it’s a brand that their customers can relate to. In the sailing world, brands like Henry Lloyd and Musto are mostly known for their casual wear, but their heritage is in sailing. Nobody’s done it this way round, said ‘let’s create a lifestyle collection for cycle apparel’,” he explains. “We met the buyer from last year, and she was saying that Wiggle has a nice business developing based on casual and non-performance cyclewear.”

The current range will be available from August. Designers are now working on the SS18 collection, which will launch to the trade in July this year. “If a guy puts the range in his shop, that’s not a hard sell. It’s got a great logo, it’s only £25,” Smith says he’s keen to work with a range of cycle retailers: “In London, I would love someone like Condor Cycles to stock them. It has a nice offering of cyclewear, and is a lovely shop. But I think any sort of cycle shop could do well with it.

“Reynolds is something that everybody in the industry knows – somebody described it as a foundation brand of the industry to me. It’s what Raleigh used to build all the bikes on in 70s and 80s, when they had TI Raleigh. That was the golden era of cycling in the UK. We should celebrate British industry and craftsmanship – the making of this beautiful componentry.”