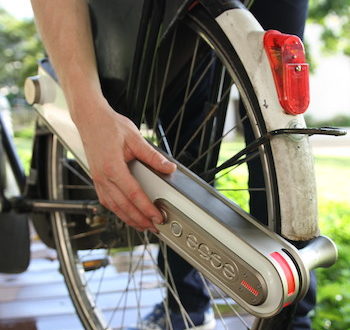 Portable propulsion pack turns any bike into an e-bike

Any bike can be turned into an e-bike with Ease, a portable motor unit. That’s the claim from engineers at a university in Singapore. Doctoral candidate Felix Römer says the Ease unit can be easily attached to almost any bicycle, turning it into a e-bike. (Any town bike, that is, because the propulsion is via contact with the tyre, and MTB knobblie tyres won’t work it.)

"The drive device is so light that it can be taken along easily before and after use," said Römer, who works at the a research facility run jointly by TU of Munich and Nanyang Technological University of Singapore.

"Riding a bicycle in Singapore’s hot and humid climate is not always pleasant. That gave me the idea of developing a flexible electric motor that can easily be attached to any bicycle," said Römer.

"There have already been several attempts to do something similar, but most of them require modification of the bicycle," Römer claimed. "The effort involved discourages many potential users."

Römer has worked with Master’s students Marius Mrosek and Simon Schmalfuss to develop the one-piece Ease.

"The unit has optical sensors that detect when the pedals are being pushed," said Römer.

"Most pedelecs feature these sensors permanently installed in the bicycle’s bottom bracket. It took quite a lot of time and trouble to get everything to work properly without cables or additional equipment."

The 250-watt device features a lithium battery enabling a range of up to 50 kilometeres. Römer claims the 3.5 kg unit can be attached to a bike in ten seconds.

"Nothing stays on the bicycle after the unit has been removed," said Römer, who is now seeking an industry partner to commercialise the technology.