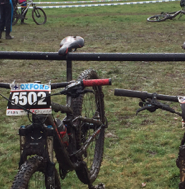 As part of a new initiative to create greater brand awareness, Oxford Products has announced that it will support the Southern XC series of MTB events taking place over the next five months.

The first round of the series was held at Aldermaston in Hampshire last weekend and saw a large number of keen amateurs race in the first competitive event of the season. Prizes for podium places on the day included products from Oxford, Taya and Flaer.

Series coordinator Adam Buckland commented: “We had a record number of pre-entries and despite the weather, on-the-day entries were good too. Racers embraced the challenging conditions and smashed their way through the thick mud.

“Those who were strong enough to get on the podium were rewarded with fabulous prizes from series sponsor Oxford. After the podium celebration, we received thanks from riders who were presented with useful prizes instead of the usual mugs which only have one use.”

Oxford’s commercial head of cycle David Jesson added: “We are focused on building our brand in the cycle market with increased distribution and infrastructure within the company; we also need to let customers know what we have on offer to enhance their cycling experience. From luggage and accessories to helmets and security, we really do have a full range of product for the leisure cyclists, road or MTB.”

The series runs over a total of five events culminating in East Sussex on July 16th.