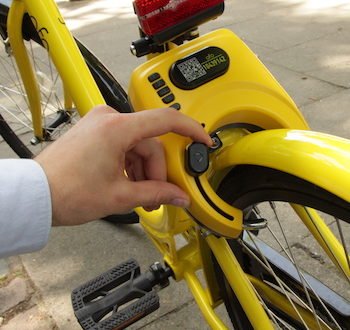 Chinese dockless bike share firm is rolling out an enhanced service in Cambridge following a "successful beta trial" and a "positive response" from the council, residents, and users.

As part of its official roll out in the city, Ofo will be providing more bikes, adding Bluetooth locks to its entire fleet, and will work with major employers in the city to create designated dockless hubs to encourage staff to cycle their commute. The company plans to enter more cities in the coming months, it said in a statement.

Ofo will be expanding its fleet to 150 bikes in Cambridge, with plans to continue expanding to meet demand.

The company has been working with Cambridge Science Park, Trinity Centre and other large employers to create designated hubs for its bikes.

These hubs would be situated outside company buildings, and Ofo’s ground team would ensure a consistent level of bikes are available for staff to use. Visible in the ofo app, these would encourage workers in the city to commute by bike rather than car.

Ofo is one of a number of Asian dockless bike share companies to be expanding in Europe. The Platform on Bicycle Sharing & Systems (PEBSS) – a body formed by the European Cyclists’ Federation – has issued a position paper on dockless systems and this warns of European cities being "swamped" by the dockless bikes.

PEBSS’ “Common Position Paper on Unlicensed Dockless Bike Share” discusses the "disruptive innovation of app-based, un-anchored and un-licensed bike share schemes, and how that may affect Western markets as they expand aggressively.

The dockless bike share sector is facing other problems in Europe. At the weekend, London’s City hall ordered Obike of Singapore to remove hundreds of dockless bikes it had “dumped” in London.

Will Norman, London’s walking and cycling commissioner, said City Hall was “furious” at the company after its bikes were “randomly strewn” across the capital.

Want to read more about dockless bike share? BikeBiz has this long-form article on how they could transform cities and the global bicycle industry.