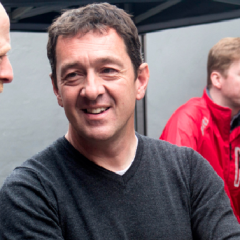 Manchester will be transformed into a cycling city, predicts Boardman

Last night BikeBiz revealed that today Chris Boardman would be unveiled as Manchester’s walking and cycling commissioner. This is a newly created role for the Olympic gold-medalist, and he will report directly to Manchester mayor Andy Burnham.

The role has both clout and cash – Boardman this morning told BikeBiz that the money to be made available to prioritise active travel in Manchester will be "meaningful". There’s no news yet on how meaningful because now is what Boardman’s is calling his "honeymoon period" where there’s nothing concrete to applaud or oppose. His role officially starts on September 1st. And the role will be Boardman’s main one. He may continue as British Cycling’s policy advisor but he will scale back his other roles, even his TV punditry.

"Everything I currently do will play second fiddle [to this new role]," he said. "Obviously I normally spend July talking about the Tour de France [for ITV] but if that needs to change it will change. My new role will be the biggest thing I do by far."

What about those who might say his involvement with British Cycling and his role as a cycling pundit marks him out as too aligned with cycling and not conversant with walking? "I’m actually more pro walking than pro cycling," Boardman assured BikeBiz. "I work a lot in London and when I do so I always walk rather than cycle. The priorities in my new role will be for walking to be considered first, then cycling, with public transport third."

He says he got the role after being challenged by Burnham. "It was impossible to say ‘no’ because I’ve long been ranting about getting political support for walking and cycling," said Boardman. "We’re currently working on the rules of engagement before I officially take up the post but I’ve got to say that so far it’s been like pushing on an open door."

Burnham, with another three years on the clock as Manchester’s mayor, has an annual budget of £6bn, much of which can be spent on transport, believes Boardman. His role is similar to that of Andrew Gilligan, London’s former cycling commissioner and who answered directly to then London mayor Boris Johnson. "Manchester has ambitions to be a real leader on active travel," said Boardman.

More ambitious than London, bigger than Boris, grander than Gilligan? "It’s our aspiration to show London how it should be done," he exclaimed."It’s possible that Manchester’s [active travel] budget could surpass London’s. Cycling and walking tick so many boxes. What with the news that petrol and diesel powered cars are to be phased out by 2040 the timing’s right for us to think about how to do things differently in our cities."

He added that his vision aligns with Burnham’s and also with Councillor Chris Paul with whom Boardman will be working closely.

"There have been no battles," he said. "We have similar ideas on where we want to get to. I’ve always said that what we need in the UK is the political will to push for active travel. In Manchester we’ve now got that. Cash has never been the biggest stumbling block, there are always ways to get funding if the political will is there. Getting more people active isn’t about cycling or walking it’s about health, and that’s a message that all politicians should aim to push."

Boardman concluded that his behind-the-scenes work with Burnham and Paul had been "inspiring" and that Manchester could become Britain’s healthiest city. "Advocates have long promoted that investing in active travel brings major economic and health benefits," said Boardman.

"We now have a chance to put that into practice."