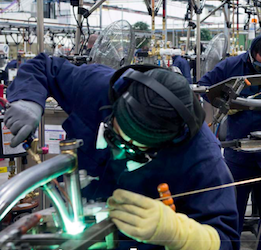 Made in Britain: the tradition of English production

It’s no secret that a lot of cycle manufacturing takes place outside of the UK. Kieran Howells considers a handful of British-made products, and delves into the history of UK-based production and assembly.

If the developments of the past year are anything to go by, it’s clear to see that Britain is currently a hub of cycling innovation. According to the latest numbers, the UK ranks 11th in the list of the largest manufacturing nations in the world, with a reported 2.6 million people currently under employment within the industry.

Modern startup culture and the popularity of crowdfunding are playing a massive part in this fast-moving industry by facilitating the creation of the latest generation of cycle technology. Meanwhile, traditional cycling industry mainstays, such as Squire, Brooks and Pashley, continue to retain their British manufacturing heritage despite rising construction costs and the lure of discounted Far-East factories.

With regards to up-and-coming products, roughly 140 start-ups and individuals have created cycling- related Kickstarter campaigns in the UK within the past year, including Queen of the Mountains cycle apparel, Lumo safety cycle clothing, Vel Oh bags and the innovative new cycling satellite navigation system Beeline. The funding tool trend is far from over, as many of the bigger names amongst the successful campaigns have gone on to find distribution by major names, some of which have resulted in deals with Cycle Republic and Evans.

One of the most significant news stories of 2016 with regards to manufacturing was the announcement that children’s bicycle specialist Frog bikes would move manufacturing from Asia to a brand new factory in South Wales. The development ushered in a new era for the brand, which not only retained more control and supervision on the quality of its products, but also created a host of new jobs in the local community, whilst reducing its environmental footprint. Another brand that made news this year is Brompton. Since creator Andrew Ritchie came up with the concept of a compact folding city bike in his South Kensington flat in 1975, Brompton has been a leading authority in folding bikes.

The current Brompton frame is astonishingly close to the original designs that Richie developed in the 1970s, and the concept has forever changed the process of commuter cycle production. 80 per cent of Brompton bikes are shipped overseas, all of which are designed, made and sent out from the new Brompton factory located in Greenford, Greater London. The new premises have enabled Brompton to utilise the 240 members of staff on-site, and completely streamline the precision manufacturing process that creates over 44,000 bikes per year to 45 countries worldwide. This has included increasing the amount of manufacturing space – effectively doubling the number of bikes that the brand is capable of creating – dedicating floor space to the production of a new electric folding bike which the industry has yet to see and possibly the most significant change, cutting emissions from the production by bringing the painting and powder coating in-house and in the process cutting out the thousands of hours worth of driving emissions needed to ferry the frames to the previous painting location in Wales.

Historic brand Squire has roots in British production traceable all the way back to 1780, when William Squire began making locks with his son Thomas. With the help of the industrial revolution and the Napoleonic wars (yes, Squire is really that old) Squire experienced a massive period of growth and development. By the end of the 19th century, the brand had added a further three acres to its expanding factory premises to meet the increased need for its diverse range of locks. The shift to the bicycle security market took place shortly after the Second World War, in which time Squire dominated the bike lock market, and released a successful range of accessories and componentry. The brand expanded again in the 1970s and 1980s, when the work force peaked at 350 members of staff.

In the modern age, Squire continues to provide high-quality locks and accessories to the global market, and uphold over 200 years of rigorous manufacturing standards. It is well-known for its signature carabiner-shaped Squire Snaplok, which combines a robust combination lock with a hardened boron alloy steel shackle. It remains steadfast in its belief that British manufacturing is imperative to the success of Squire, as well as the cultural and historical heritage that it carries with its name. “Products made in Britain are not only of better quality, they are also renowned for better performance,” commented CEO John Squire, who attributes the brand’s success to its ability to transform with trends, stock demands and the latest innovations. “Continued investment in state-of-the-art manufacturing technology is critical to the design of our new products. It complements our ongoing investment in innovation and training. In Britain, we are able to offer innovative products in line with customer needs, because we are close to the market and can react quickly. We focus on world-class manufacturing in the UK, and creating a platform for research and development to secure the future of the company.”

Starling Cycles’ hand-built, steel mountain bike frames are designed and built by Joe McEwan in his home workshop in Bristol. McEwan is a genuine frame builder, turning tubing into high-performance British-made bikes, and working with his customers to offer custom geometry. He brought together his love of mountain bikes and his expertise from nearly 20 years in the aerospace industry to create strong, fast, uncomplicated mountain bikes. 2017 sees McEwan make the step forward to building frames full-time; the launch of the 29” Starling Murmur created huge interest and his year is now dedicated to fulfilling orders and growing his business.

For over 20 years, Fenwick’s has been producing quality British- made care and maintenance products including extensive cleaning, lubrication, protection and braking ranges. The Shropshire-based brand has been family-run since its inception in 1995, and believes that English manufacturing is a key element to its business. Managing director Jonathon Smith recently told BikeBiz: “Utilising local suppliers for all aspects of our business is imperative to our success. The only true way to make our UK economy strong is through manufacturing, and by actually creating wealth and not just passing it around.”

Fibrax has been a leading figure in the production of brake pads, cables and components in the UK since 1902. The brand moved to its current base in North Wales in the early 1970s, where it has focused on utilising the latest production techniques and machinery for the last 40 years. A small team of design engineers develop and refine the products to complement the latest bicycles to hit the market.

Pashley is England’s longest established manufacturer of hand-built bicycles. Every Pashley unit is handcrafted in the brand’s factory in Stratford-Upon-Avon, on the edge of the Cotswolds. Since its creation as a family-run entity in 1926, Pashley has prided itself on retaining 100 per cent of its manufacturing and production in Britain, which the brand claims is the cornerstone of its continued success. Pashley bicycles are created using the same traditional building techniques as the original models. The steel tubes that make up the framing are hand-brazed into lugs, giving them fewer inbuilt stresses and heat-affected zones.

The original British “standard of excellence” in frame-building, Reynolds tubing is utilised in many traditional British cycle frames for its high-strength, lightweight qualities. Although steel is sometimes regarded as old- fashioned, it is still considered an ideal material for building bicycle frames. High-tensile steel has greater strength and stiffness value than aluminium or titanium alloy. Steel responds well in fatigue conditions, and is able to withstand the repeated stress typically placed on a bicycle frame. Specifically, a steel cycle frame can impart a better feel and ride comfort than its aluminium or titanium alloy equivalent.

Share
Previous Leatt releases 2017 range
Next In the Saddle with: Bruno Nascimento