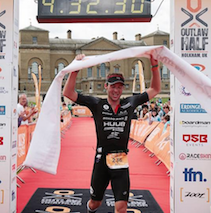 Triathletes Lucy Charles and Reece Barclay will be answering questions at the 2017 London Bike Show.

The pair will talk training and race craft at the Tannus Tyres stand at the ExCeL show next week. Barclay gained critical acclaim as the UK’s number one ranking Iron Man triathlete of 2016 whereas Charles recently finished tenth in the Dubai-based Iron Man 70.3.

Both cyclists are currently taking a brief break from winter training before heading off to a rigorous three-week training camp in Lanzarote, where they will begin their season with the Gran Canaria half-distance Challenge Race.

The pair will appear at the Tannus Tyres stand LL1141 on Thursday, February 16th from 11am to 1pm and Sunday, February 19th from 1pm to 4pm.