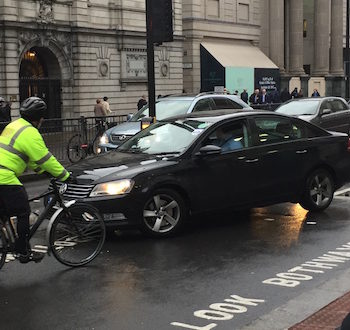 BikeBiz staff writer Kieran Howells this morning witnessed a taxi driver using a kerb-protected Cycle Superhighway to jump a motor-traffic queue. The roads in the nation’s capital have been under pressure because of the 24-hour tube strike.

The driver of the private-hire taxi knew he was driving along a portion of the road dedicated to cyclists.

"He drove at least a quarter of a mile down the giant Southwark cycle superhighway and turned into traffic at the crossing to Southwark Bridge," said Howells, who stopped his bike to take photographs of the illegal manoeuvre.

"It is protected all the way to the lights, and then is protected again after the crossing, so he would have had to drive a long way down an obvious cycleway," added Howells.

"Confused cyclists were swerving to get out of the way. He was doing it to avoid the stationary traffic all the way down past Blackfriars.

"Other motorists were beeping at him. He saw me taking pictures of his number plate and he didn’t appear to care. There was a passenger in the car who looked extremely embarrassed."

The VW Passat’s vehicle registration number is GY13LFE and the private-hire disc number is 320861.

Share
Previous Orange to reveal mystery products at The Bike Place
Next Market report: will President Trump be good for the bicycle business?