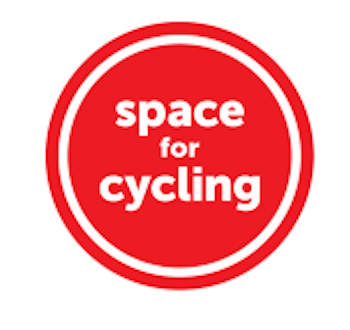 Cheshire East Council has become the first local authority to pass a motion supporting the space4cycling campaign. This campaign was seed-funded by the Bike Hub levy fund and is delivered by Cycling UK. The council is to allocate 8.5 percent of its local transport budget to active travel for the year 2017/18.

The motion was yesterday passed unanimously – it reads:

“This Council supports the Space for Cycling process promoted by Cycling UK and commits to providing the funding to implement its cycling policy effectively.”

The motion was proposed by Labour councillor, Sam Corcoran, and seconded by Conservative councillor, Howard Murray, at a council meeting last year. This was a result of both councillors attending a Space for Cycling workshop organised by Cycling UK.

The council’s strategy “sets out an ambitious vision for a network of high-quality strategic cycle routes which connect local communities and key growth areas, whilst also giving access to leisure opportunities and Cheshire East’s natural environment.”

In addition, Cheshire East have secured a share of £5 million, which was allocated to Cheshire and Warrington to improve cycle routes that link key housing and employment development sites.

“We are ecstatic to see Cheshire East show such bold leadership regarding cycling. To see a county council allocate 8.5 percent of their local transport budget to active travel is a clear mark of what can be done when the political will exists.

“The vision of the strategy is good but the detail over delivery is lacking and the resources needed are not yet available. If the Conservatives are serious about improving cycling facilities then they need to provide the staff to help develop safe cycle routes.”

The space4cycling campaign was originally developed by the London Cycling Campaign. The LCC’s campaign was also seed-funded by the Bike Hub fund.