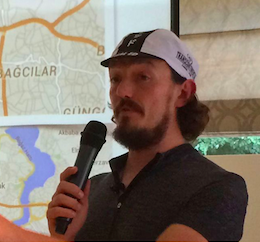 A JustGiving page has been set up to help support the family of ultracyclist Mike Hall following his death today during in the Indian Pacific Wheel Race.

Hall was killed earlier this morning in a road traffic collision during the Indian Pacific Wheel Race in Australia while riding on the Monaro Highway, south of Canberra, at 6.20am. So far the page has already raised over £6,000.

Organisers of the event confirmed that the 35-year-old from Yorkshire was the victim and have cancelled the coast-to-coast event. A tribute ride is planned for Sunday in Sydney at the city Hall.

Family friend James Hayden, who set up the JustGiving page, said: “This page has been set up to raise money to help Mike’s family in this difficult time. Mike will be remembered by us all for his kindness, good heart and bravery. Mike was a shining light in many of our lives, enabling us to find the best of ourselves.

“My sincere thoughts and love are with Anna, and Mike’s Family. The money raised will go to Mike’s mum, Patricia, to cover any costs. Any money raised beyond her costs will be for her to decide the right cause. So please donate generously.”

Mike Hall was an influential figure in the world of ultracycling, not just for his riding, but also for the events he organised – this year sees the fifth edition of the Transcontinental Race, which he founded in 2013.

In 2012, he won the inaugural World Cycle Race and in 2013 and 2016, he won the Tour Divide ultra-endurance mountain bike race across the Rocky Mountains in Canada and the United States.

He also won the TransAm Race twice and the Tour Divide, and holds the records for completing both events in the shortest time. In 2012, he won the World Cycle Race in 91 days, 18 hours, faster than the then-Guinness World Record for circumnavigating the globe by bicycle.

If you wish to donate to the fund, please visit the JustGiving page here.